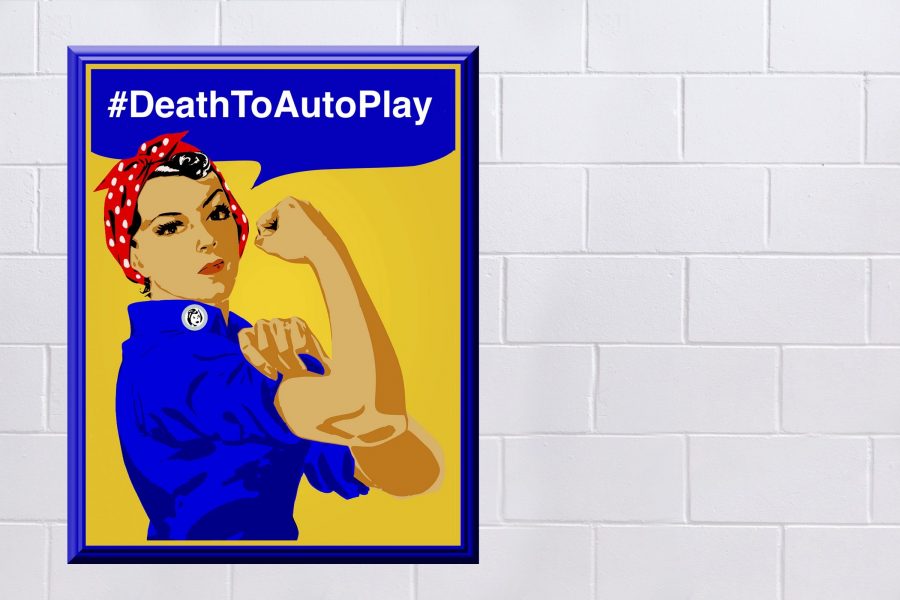 Most technology annoyances fall into the category of “death by a thousand cuts.” Tiny text on dark backgrounds, controls that appear only when you mouse over an otherwise unremarkable spot, links that don’t stand out from surrounding text, and so on. We won’t even get into all the crud that happens silently in the background, with companies tracking your every move and monetizing every bit of personal information you disclose, knowingly or unknowingly. It’s no longer the Internet I signed up for.

But there’s one trend that’s so blatant, so patently offensive, so callously disrespectful of our time and attention, that we can no longer sit by and suffer. I am of course speaking of the dreaded auto-play videos. There is little more surprising—or even alarming—than having audio start blasting from your speakers while something starts moving before your eyes. It triggers all sorts of fight-or-flight reactions buried deep in our brainstems, wakes the kids, and scares the pets.

Over at the New York Times, Brian X. Chen penned a thoroughly reasonable column explaining why advertisers use auto-play videos and some of the technical solutions for reducing their impact. Google Chrome tries to prevent them from playing based on your behavior, and Safari on the Mac, which Chen doesn’t mention, can also block them, either for a particular site or for all sites. And Firefox 66, due in March 2019, will mute all auto-playing videos.

But I’m not feeling reasonable. I’m as mad as hell, and I’m not going to take this anymore! (To quote the 1976 movie Network.)

The auto-play offense that has pushed me over the edge is Netflix’s Apple TV app, which auto-plays previews for movies and TV shows as you browse through Netflix’s library. Within 3 seconds of when you navigate to a show’s icon, it starts playing a preview for the show, complete with audio. It’s difficult even to read the show’s description in that amount of time, much less reflect on whether you might want to watch the show. As soon as the audio starts, it interrupts whatever thoughts might be going through your head (Josh Centers made this example video; it shows what he hears as his 5-year-old browses).

(This is different from Netflix’s Post-Play “feature” that automatically starts the next episode in a TV series if you don’t navigate away from the credits screen as one episode ends. Some devices will even automatically play related titles after you finish the last episode in a series or a movie. Personally, I consider this behavior nearly as offensive as the auto-play previews, but at least Netflix lets you turn Post-Play off.)

Netflix is far from alone here. The most egregious offender in the Apple world for years was the Macworld Web site, which still auto-plays videos on many of its pages but now appears to default to muting the audio. (I gave up on Macworld long ago in protest of this behavior, in large part because the management also ignored the complaints of the writers over whose articles the videos played.) On a quick spin through the Web, CNNnow seems to be among the worst when it comes to forcing you to listen to some video’s audio while you attempt to read a news article.

Auto-play videos are horrible for usability. As Amy Schade of the Nielsen Norman Group says,

When users arrive at a webpage, they don’t appreciate being surprised by video or audio content that begins playing without their consent. Video, and the accompanying audio, can confuse or distract users, and can interfere with their consumption of content on the page.

Those users who do not want to watch the video must devote cognitive resources and extra effort to figure out how to turn the audio off or pause the video, rather than focusing on their goals and information needs. Any movement on the page can be a distraction.

I’d go further and suggest that auto-play videos are an assault on our autonomy as human beings. They’re an insidious effort to eliminate our free will and compel us to behave in a particular way: “Don’t read that. Watch this instead.” (Best read in an Obi-Wan Kenobi “These aren’t the droids you’re looking for” voice.)

Sure, it’s just a small encroachment on free will now, but auto-play videos exist because they are supposedly more effective for advertising and stickiness. And at least on Netflix, we’re paying for the privilege of being manipulated! Just because something is effective doesn’t mean it’s acceptable. If we sit idly by now, who knows what companies will try next to get us to watch, click, like, or buy.

So let’s fight back. If these companies shoving these videos in our faces aren’t willing to at least provide options to turn them off, let’s exercise our right to be annoying right back with a little constructive—and hopefully costly—criticism. Perhaps auto-play videos are effective in some ways, but they’re offensive in many others. We don’t have to sit and take it like couch potatoes, especially when we’re paying customers!

Since Netflix is what’s making me crazy right now, I called the company’s customer support line at 866-579-7172 and asked how to turn off the auto-play previews in the Apple TV app, knowing full well that it wasn’t possible. I had to clarify a few times that I wasn’t talking about the Post-Play feature, and I made it clear that I found the auto-play previews so annoying that they were causing me to avoid Netflix.

Eventually, after checking with higher-level support a few times, my rep came back and admitted that what I wanted couldn’t be done. He said he would pass my feedback along to his supervisor though, and when I noted that I knew others who were equally as perturbed, he encouraged me to spread the word, saying, “The feature will be gone as soon as enough people tell us that they don’t like it, so please have anyone else you know who’s experiencing this get in touch.” Now that’s what I like to hear.

That call took 13 minutes (in my AirPods, while I was writing and editing this article, so it was only a couple of minutes of my time). A few sources on the Internet suggest that it costs about $1 per minute for an average call center to service a call. So my call cost Netflix $13, meaning that the company lost money on me for the month. How about we scale that up? While we’re at it, let’s throw a spotlight on Netflix’s behavior on Twitter too.

To make our rebellion more high-tech, I’ve created a simple shortcut in iOS 12’s Shortcuts app to simplify contacting Netflix. It assumes that you have two apps installed on your iPhone: Shortcuts and Twitter, but if you don’t use Twitter at all, you can delete those steps in the shortcut. After you’ve downloaded those apps, on your iPhone, add this shortcut to your Shortcuts app and then switch to the Library view to access it. You may need to allow the Call action access to your contacts, but it works purely from entered text. 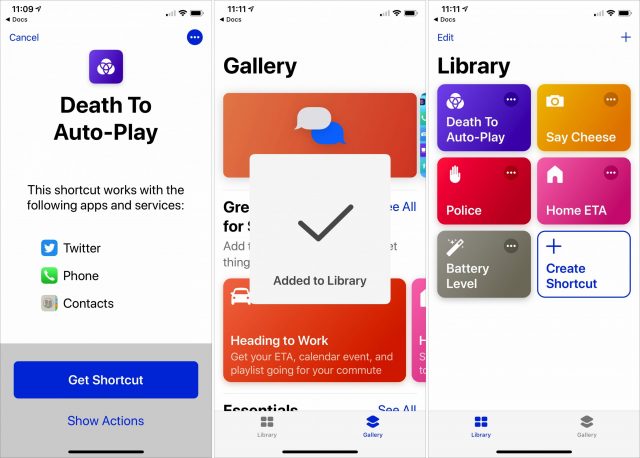 When you invoke the shortcut, it does two things: 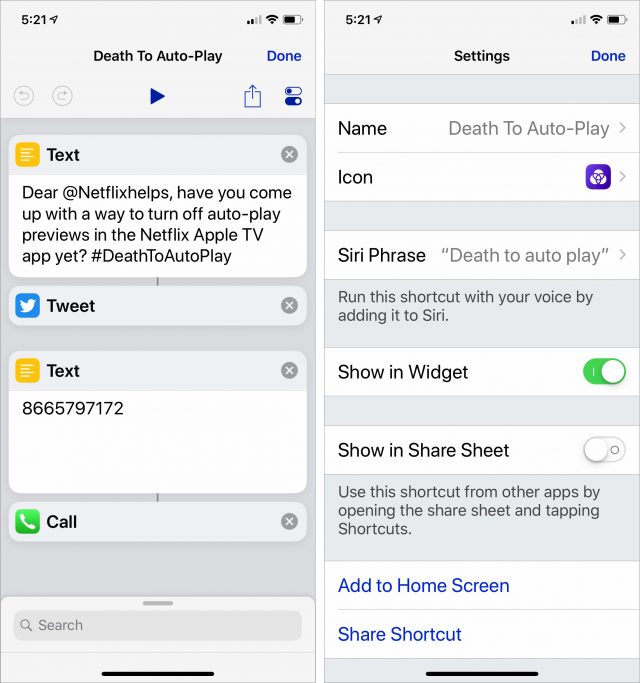 To invoke the shortcut, I recommend recording a phrase you can use with Siri. Tap the toggle-switch icon at the top right of the shortcut, tap Add To Siri (it changes to Siri Phrase once you’ve recorded), and then record your phrase. I recommend “Death to auto-play!” because it’s fun to say.

Then, whenever you’re browsing through Netflix and being harassed by the auto-play previews, pull out your iPhone, invoke Siri, and say “Death to auto-play!” The shortcut will queue up a tweet that you can edit or just post by tapping the Tweet link (you may have to tap the hashtag to dismiss it first). Then it will dial Netflix support so you can have a costly conversation with a nice support rep. 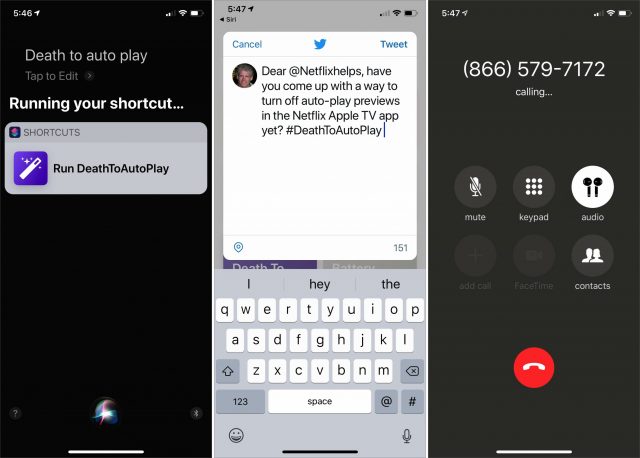 Now I don’t want to pick on Netflix. Wait, yes, I do! But we shouldn’t forget that CNN and other companies deserve similar treatment (wikiHow has a How to Contact CNN article for Twitter handles and phone numbers). Feel free to repurpose my little shortcut for whatever company is trying to take over your brain with auto-play videos. Let’s get that #DeathToAutoPlay hashtag trending!