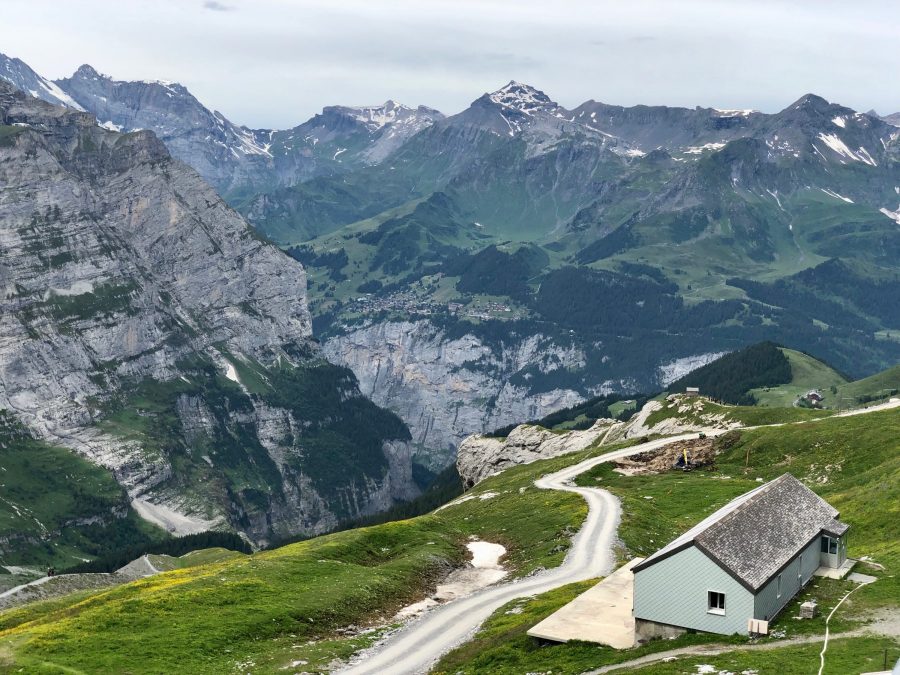 Along with navigation (see “Real-World Observations about Mapping Apps,” 19 August 2019), one of the top vacation uses of an iPhone is for taking photos—as the saying goes, the best camera is the one in your pocket. In a typical week, I might take a couple of photos, but over the two weeks while Tonya and I were traveling in Switzerland, I snapped over 1000. Switzerland is unreasonably scenic, so it was nearly impossible to resist yet another postcard-perfect shot of a gorgeous Alpine valley. Despite that compulsion, now and then I’d try to take a step back and think about why I was taking a photo. They fall into a few categories, and tied up in each is how I might share any given photo:

We have a private Slack group for our immediate family members, and one of the best uses of it has been for sharing vacation photos during a trip. Every day, when we were done hiking or exploring, we’d post a couple of photos—generally scenery and selfies—to the #general channel that everyone in the family can see. If we had taken photos specifically for our son Tristan, such as of the architecture at the Ecole Polytechnique Fédérale de Lausanne, we’d post those separately in the private channel we share with him. 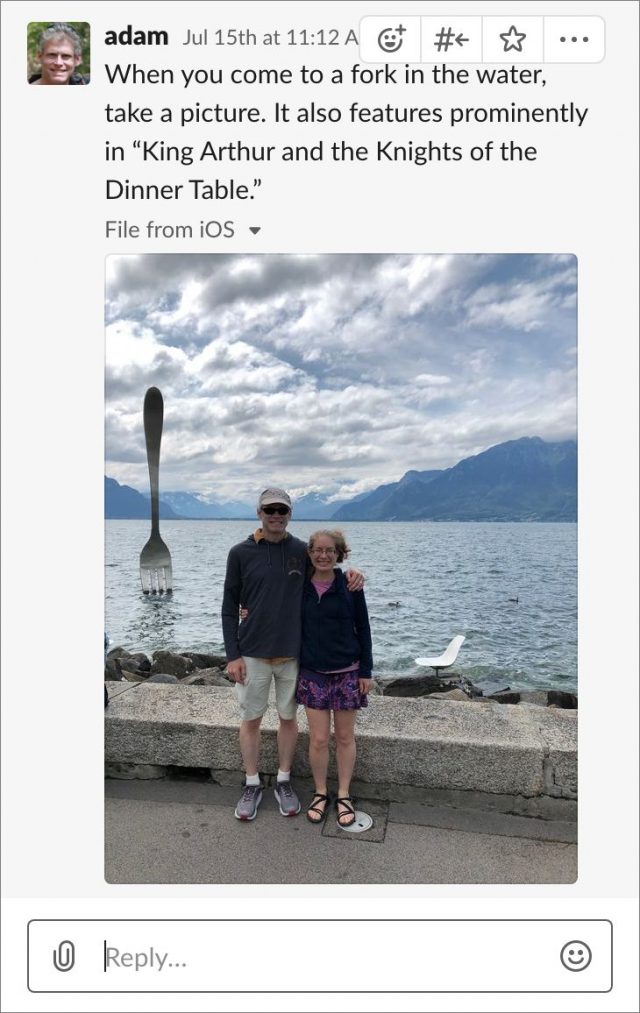 This approach worked tremendously well, since it didn’t require us to spend much time fussing with photos during the trip, and we could give a sentence or two of travelogue to explain each one. Since it was just family, we didn’t have to think about how the photos might be received by the public, which made things easier. Even selecting the photos for this article was a bit stressful, since I wanted them to be as nice as possible while simultaneously illustrating the point I was trying to make.

That’s relevant because sharing to Facebook (or its wholly owned subsidiary Instagram) or Twitter is a completely different act. I’ve never been comfortable with large-scale sharing via social media, and I have an ever-deepening revulsion for these companies and their services based on how they manipulate their users for profit and are abused by state actors to influence society at large (see “Fed Up with Facebook? Move Your Family to Slack,” 12 February 2019).

Your opinions may vary, and while Slack may not be the ideal solution for your family, I’d still encourage you to figure out a way to share vacation photos easily with the people with whom you’re most close. A Messages conversation or even plain old email would work, although we’ve found on past trips that email takes more effort to compose and can result in long conversations you don’t want to have while on vacation.

Full-Scale Sharing with Your Traveling Companions

If you’re with your spouse, family members, or friends on your trip, you’ll probably want to share photos with them as well. Tonya tended not to take a photo if I was already doing so, but she did capture some nice ones of me that I wanted, and she also wanted to be able to see my photos on her devices. Alas, despite Apple’s purported support for families, the company has never acknowledged that many families want to share a single photo collection. (Yes, there’s the automatically created shared Family album if you use Family Sharing, but it’s just a shared album and doesn’t meet the desire of wanting to share all photos.)

Despite that ongoing limitation in Apple’s photo solutions, the Sharing Suggestions in Photos in iOS 12 are pretty neat. If you’ve identified the people in your photos using the People feature, Photos automatically suggests that you share photos from the event with those people (see “Inside iOS 12: Photos Encourages More Engagement,” 25 September 2018). In our case, it suggested that I share my photos with Tonya every day, and that she share hers with me. Because we often had only slow hotel Wi-Fi, it was more of a batch process, where the photos didn’t show up right away but would be there at a later date. (The Sharing Suggestions disappear after some time, so I can’t show a screenshot of us starting the process.)

My understanding is that Google Photos allows you to share all your photos with a partner, which is arguably a better system. We’re sufficiently invested in Apple’s ecosystem that we’ve never seriously investigated using Google Photos, but if you’re looking for complete library sharing with your spouse or partner, it’s worth a look. As with YouTube or any other Google service, make sure you’re comfortable with the fact that you’re giving Google a lot more personal data.

Although we also messaged an occasional photo to a particular friend a few times during the trip, we mostly held off on sharing with friends until we got home. Since then, lots of people have asked us about the trip, of course, and we wanted to show them what we’d seen.

But wow, talk about work! About 825 photos survived my initial purges of duplicate or fuzzy photos, and it took me hours to scan through them and select about 100 for sharing. Some of that time was spent doing quick editing—mostly clicking the Auto Enhance button in Photos and deciding if I preferred the new version to the original by pressing the M key while in Edit mode.

No Thanks for the Memories

There is an easier way out: use what Photos creates for you in Memories, which includes an automatically selected collection of photos and an automatically generated video. If you like what Photos has done, you can add the Memory to your favorites so it sticks around; otherwise it will disappear at some point. And you can share both the video and the individual photos in the Memory.

But I found Memories annoyingly inflexible for sharing. If the algorithm failed to pick up a photo you wanted to include, too bad. It may seem like you can delete photos, but doing so deletes them from your library completely, not just from the Memory (in other words, it’s not like an album). The automatic video may not even include all the photos in the Memory, but at least it’s possible to add and remove photos in the Memory from the movie, at least in iOS. (Play the movie, and then tap the screen while it’s playing to reveal and tap Edit.)

You can export and share the movie, and that may be both the easiest option and the one Apple wants you to do. Personally, I prefer still images that I can flip through in many cases, so I wanted to share the photos themselves instead. And then we’re back to not being able to add or delete photos from the Memory.

My solution was to create an album of the photos I wanted to share. (Hint: In the Image menu in the Mac version of Photos is an Add to lastAlbum command with a keyboard shortcut of Command-Control-A. That makes scanning through photos and adding them to an album much easier.) Once I’d had an album, I could turn it into a Memory to get the automatically generated video, and more to the point, I could use that collection as a starting point for sharing.

Photos has two ways of sharing in iOS: shared albums and iCloud Photo Links, but in the Mac version of Photos, you can only create shared albums. In both cases, you can get a Web URL to the entire collection of images and share it with anyone such that they can see the images in a Web browser. So what’s the difference?

As far as I can tell, since Apple doesn’t seem to document iCloud Photo Links in relation to iOS, just in the context of iCloud.com, an iCloud Photo Link results in the photos being shared via iCloud on the Web for 30 days. Anyone with the link can see their thumbnails, switch to showing one image at a time, and scroll through with the arrow keys. There’s an optional thumbnail browser at the bottom of the screen when viewing a single image, but no slideshow mode.

But what sets an iCloud Photo Link collection apart from a shared album is that Download button. Click it and you’re given the option of downloading all the photos, either as files or by importing directly into your iCloud Photos. This is a great option for sending photos to someone who you know uses iCloud Photos and will want the images in their Photos library, and it also works for someone who might want to download the originals but doesn’t use Apple devices. (I used it for sharing photos after the fact with my via ferrata climbing companions.) At least on my Mac, the download comes in as a HEIF image (with a confusing .HEIC filename extension, sigh) along with a QuickTime movie if the image was a Live Photo. I would guess that downloads would be JPEGs on other platforms.

In contrast, when you create a shared album, you have slightly different options. (First, turn them on if necessary in Settings > YourName > iCloud > Photos in iOS and in System Preferences > iCloud > Photos > Options on the Mac.) You can share a shared album explicitly with people who have iCloud accounts, at which point the shared album appears in Photos, or with anyone via a link, if you turn on the Public Website switch for the album.

These are quite different use cases. When you share an album with someone who has an iCloud account, they can not only see the images in Photos itself, they can like or comment on each photo, and if you enable the option, they can also add photos to the album. If they want to retain the photos locally for posterity, they can simply drag them from the shared album to another album.

However, when you select the Public Website option for a shared album, they can view the album’s photos on a Web page in an attractive grid format. Clicking a photo displays it on its own, and it’s also possible to make it full-screen, download the image, or display all the photos as a slideshow. Sadly, it’s not possible for the viewer to like or comment on a photo, although it’s easy to see why Apple limited such behavior to iCloud users given that the URL could get out and be seen by anyone on the Internet. Of course, if that happened, it would be easy to turn off the shared album.

I ended up sharing an iCloud Photo Link with the friend who put us up for a few days at the start of the trip, since she wanted to see all the photos and download some of the scenic ones for her own vacation planning. The other benefit was the 30-day limit for the link, so she didn’t have to think about or remove the shared album from Photos manually.

For the rest of our friends, I created a shared album and shared it with Tonya in case she wanted to add any photos, but sent everyone else the link to the public Web page.

Which of these sharing methods will work best for your situation depends on what capabilities you want to provide to those viewing the shared photos. And, of course, there are other alternatives if you want to step further outside Apple’s Photos ecosystem.