The wait is over. At its live-streamed “One More Thing” event, Apple introduced M1, the first Apple silicon chip to power a production Mac. (You’re excused if you thought Apple had already used that letter, because it did, for the M-series motion coprocessors.) Without missing a beat in the tight 45-minute presentation, Tim Cook and company then unveiled the first three models in the Mac lineup to take advantage of that chip: the MacBook Air, the 13-inch MacBook Pro, and the Mac mini. 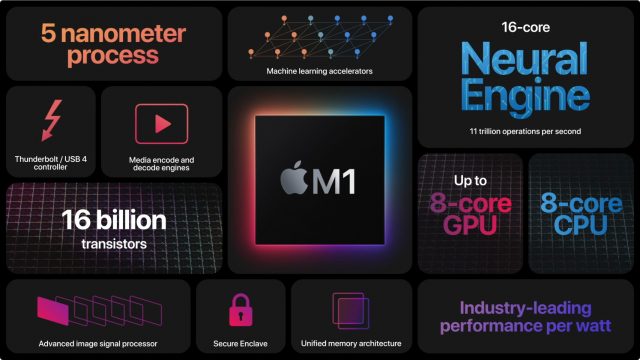 Notably, the M1 and its significant performance and power usage benefits are the only changes in these Macs. Although the company could have used the transition to Apple silicon to unveil new industrial designs or other hardware changes, Apple seems to have settled on a simple message about the M1 chip: “It’s just better.” By keeping the same cases for these three Macs, nothing distracts from that message. 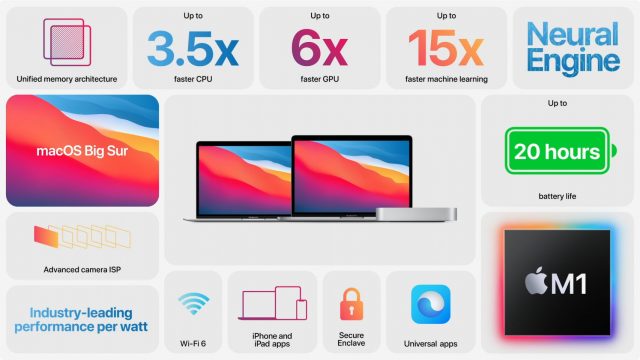 For the most part, I’m not going to get into chip-level details about the M1. What users care about is how it works in Macs, not that it’s the first personal computer system-on-a-chip (SoC) built using the 5-nanometer process or that it has 16 billion transistors. If you’re interested in Apple’s story about it, check out the M1 page for all the details about its industry-leading performance per watt and other benefits.

It’s also worth noting that although the Intel-based MacBook Air has disappeared from the product lineup, the Intel-chip versions of the 13-inch MacBook Pro and the Mac mini remain available for sale in different configurations and at higher price points. That’s an interesting fact in and of itself since it shows that Apple wants to give customers a choice for some time yet. Memory limitations may be related—the M1 Macs are all restricted to no more than 16 GB of RAM. macOS compatibility undoubtedly plays a role—these new Macs require macOS 11 Big Sur and cannot run 10.15 Catalina. Another likely reason is that some tasks, like running Windows in a virtual machine, may not be possible for some time. More generally, despite the Rosetta 2 translation environment, it’s possible that Apple anticipates some compatibility issues in the first year or so. Or, perhaps, Apple recognizes that some customers simply won’t feel comfortable trusting an Apple silicon Mac for a while.

Finally, all three of these Macs are available for ordering immediately. Let’s take a look so you can decide if one of them might be in your near future. (One tip—even if you’re not interested in the MacBook Air, don’t skip reading about it since my descriptions of the MacBook Pro and Mac mini build on the MacBook Air’s.)

The MacBook Air is Apple’s most popular Mac, and the company claims it’s the best-selling 13-inch notebook. That’s not surprising—the MacBook Air has long provided a brilliant combination of decent performance, elegant industrial design, and affordable price. For several years, it suffered from the butterfly-switch keyboard, but Apple addressed that problem earlier this year (see “New MacBook Air Features Magic Keyboard and Lower Price,” 18 March 2020). I almost replaced my 2012 MacBook Air then, but with the pandemic eliminating all my travel, there was no need. Now I’m happy I was encouraged to wait, since the M1 MacBook Air blows that last Intel-based model out of the water, and to torture the analogy, it does so without a fan. 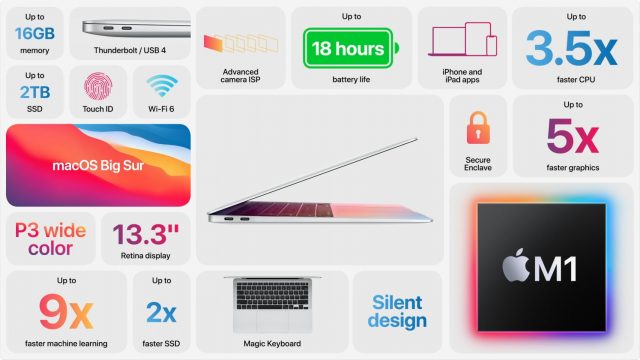 The 8-core M1 chip gives the MacBook Air up to 3.5x faster performance than the previous model, and the model with the 8-core GPU boasts graphics performance up to 5x faster. The 16-core Neural Engine on the M1 chip provides machine-learning workloads with up to 9x faster speeds. Finally, the combination of the M1’s integrated storage controller and the latest solid-state storage technology means that the MacBook Air delivers up to 2x faster SSD performance. (Storage levels include 256 GB, 512 GB, 1 TB, and 2 TB.)

Typically, such performance increases would be accompanied by increases in processor temperatures, requiring an advanced cooling design and, almost universally, a fan. I don’t know about you, but I hate fans. My 2012 MacBook Air is on its last legs, and one of its problems is that it will often wake up when the screen is closed, overheat, and then start blasting the fan. So the fact that the M1 chip enabled Apple to provide much greater performance without needing a fan at all is alluring.

Another performance win comes from Apple’s use of on-chip “unified memory,” which makes the memory more quickly accessible to the CPU, GPU, and Neural Engine cores. For the MacBook Air (and the 13-inch MacBook Pro, as we’ll see), the memory configurations remain the same—8 GB standard, configurable to 16 GB for $200. However, there’s a downside too. Apple has produced the M1 chip in only 8 GB and 16 GB configurations, so there’s no way M1 Macs can be configured with more memory than that, something that may be problematic for some people deciding between the M1 and Intel models of the MacBook Pro and the Mac mini. 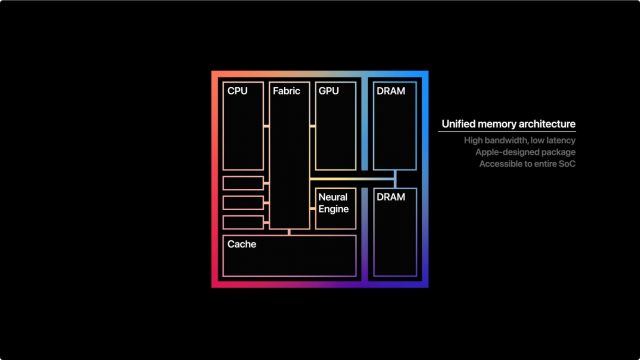 It’s easy to focus on the maximal performance envelope of the M1 MacBook Air, but part of the reason that Apple could eliminate the fan is that the M1’s 8-core design has four performance cores and four efficiency cores. With Apple controlling both the hardware (the M1) and the software (macOS 11 Big Sur), the MacBook Air can adjust which cores it’s using at any given time, either to feed a processor-hungry app or to reduce power drain when the user won’t notice an impact on performance. 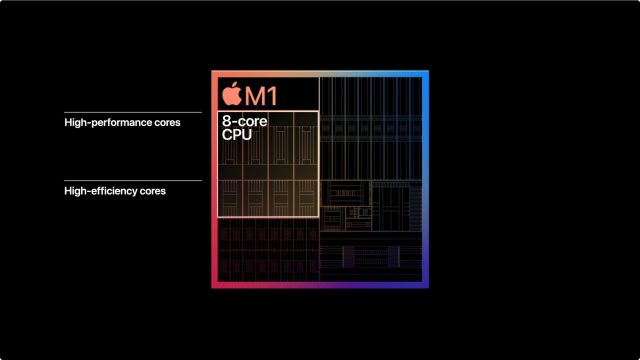 That all combines to give the M1 MacBook Air the longest battery life ever on a MacBook Air. Apple rates it at up to 15 hours of “wireless web” and up to 18 hours of “Apple TV app movie playback.” Those numbers remain as meaningless as ever, but they’re significantly better than the previous model’s 11 and 12 hours, respectively, despite having the same 49.9-watt-hour battery. Back in the real world, Apple also said the new MacBook Air would offer up to twice the battery life during videoconferencing, which is a big deal for many people.

Further down the spec sheet, the M1 MacBook Air has quite a few small improvements.

The M1 MacBook Air is available in two configurations, and, frankly, the split is a little weird. The low-end model provides an M1 chip with an 8-core CPU and a 7-core GPU, plus 8 GB of unified memory and 256 GB of storage for $999. The high-end model provides an 8-core GPU and 512 GB of storage for $1249 (which is $50 cheaper than the previous high-end model).

Since jumping from 256 GB of storage to 512 GB costs $200, that means that the 8-core GPU model is only $49 more than the 7-core GPU model. And that’s strange. A 7-core GPU? Is it really cheaper for Apple to produce such a version of the M1, or is this the only way Apple can see to provide different price/performance combinations? It’s also possible that the 7-core GPU models are merely units of the 8-core GPU that failed testing—this is apparently common practice in chip manufacturing (see these three Quora discussions). I’d prefer to see a single model with the price difference being related purely to memory and storage choices. Unless price is paramount in your decision, I recommend avoiding the 7-core model until we learn more about it.

The real question is how the high-end M1 MacBook Air compares against the M1 13-inch MacBook Pro. 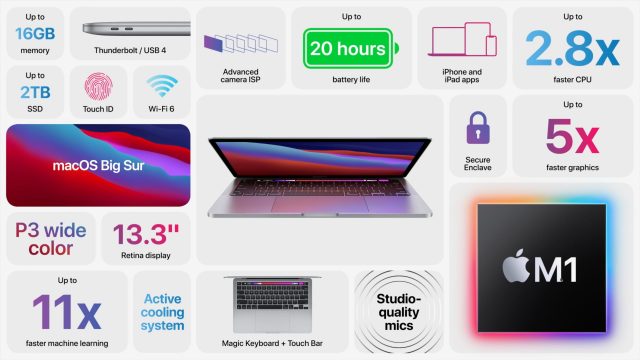 As far as I can tell, the two higher-end Intel models of the 13-inch MacBook Pro remain entirely unchanged, so I won’t discuss them further. And the two less-expensive models that now rely on the M1 chip—just as I suggested for the MacBook Air—differ only in storage options: the cheaper one has 256 GB of storage and is $200 less. So let’s assume there’s only one model in play here.

Once again, the M1 chip primarily gives the new MacBook Pro better performance and battery life. Apple says that the M1’s 8-core CPU, when coupled with the MacBook Pro’s active cooling system (read “it has a fan”), is up to 2.8x faster than the previous generation. Similarly, the 8-core GPU is up to 5x faster (there is no weird 7-core GPU model) for graphics. And the 16-core Neural Engine is up to 11x faster for machine-learning tasks.

When not tasking its performance cores, Apple rates the M1 MacBook Pro at up to 17 hours of “wireless web” and up to 20 hours of “Apple TV app movie playback,” which Apple describes as “staggering.” (We think anyone who would consider watching 20 hours of video straight, especially while on battery, should have their head examined.) It is, reportedly, the longest battery life ever on a Mac. That comes courtesy of the same 58.2-watt-hour battery that was in the previous models.

The screen, keyboard, Touch Bar, and Bluetooth 5.0 haven’t changed, but once again, there are a few additional improvements further down the spec sheet.

The question that gnaws at us is how the M1 model of the 13-inch MacBook Pro compares against the cheaper M1 MacBook Air and the more expensive Intel models of the MacBook Pro. The MacBook Pro costs $250 more than an equivalently configured MacBook Air thanks to the Touch Bar and likely some additional performance; to my mind, that’s a tough sell—I’d choose the MacBook Air.

Simultaneously, the choice between the M1 and Intel models is difficult. I’d bet that the M1 MacBook Pro will perform similarly to—or better than—the Intel models. Still, the Intel models have four Thunderbolt ports instead of two, can take up to 32 GB of RAM instead of being limited to 16 GB, and have a 4 TB storage option instead of topping out at 2 TB. Are any of those necessities? For some people, probably.

Oh, and one more thing. If Apple’s promo video is to be believed, the Mac startup chime is back!

Lastly, Apple released a new, cheaper version of the Mac mini powered by the M1 chip while retaining the high-end Intel-based model. Previously, the low-end Mac mini started at $799, with the higher-end model starting at $1099. 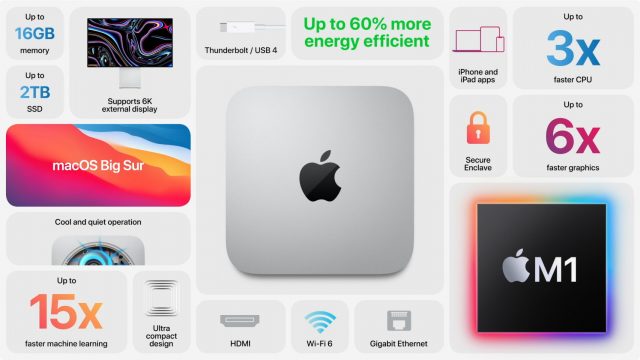 Now, the M1 Mac mini starts at only $699 and very well may outperform the remaining Intel model. I say that because Apple says the M1’s 8-core CPU provides up to 3x faster performance than the Mac mini model it replaces, the 8-core GPU offers a 6x increase in graphics performance, and the 16-core Neural Engine boosts machine-learning tasks by up to 15x. Those multipliers sound like they’d beat the performance of even the remaining high-end Intel Mac mini.

So what else is different? Not much, but the M1 Mac mini doesn’t always win, which may account in part for the $100 drop in price.

What We Didn’t See

As noted, the M1 Macs are extremely similar to the Intel Macs that they replace, with all the changes revolving around the M1 itself. That helps Apple focus on the chip’s benefits, but it also means that the company hasn’t pushed any other aspects of the Mac experience forward.

Why don’t we have Face ID on the Mac yet, or at least a camera that’s close to as good as what’s on the low-end iPad? How about a touch screen to replace the Touch Bar, or support for an Apple Pencil? Could Apple add cellular connectivity as an option, just like on the iPad? Heck, where’s a tiny Mac notebook along the lines of the 11-inch MacBook Air or the 12-inch MacBook?

Apple said that it would be bringing Apple silicon to the rest of the Mac line over the next two years, so it’s likely that we’ll see a new M chip in 2021, probably powering the iMac and the 16-inch MacBook Pro. The iMac Pro and the Mac Pro may be further out, since the maximum performance per watt isn’t as important as raw performance for machines of their class. Regardless, Apple will need to figure out if unified memory makes sense across the line, and if so, how to shoehorn a lot more memory into future versions of the M family.