When Apple introduced support for tabbed Finder windows in OS X 10.9 Mavericks back in 2013, I enabled the feature on my 13-inch MacBook Air to see how it worked. It seemed like it might be a useful way to deal with the MacBook Air’s small screen size, given that I’m accustomed to working on a pair of large screens (currently a 27-inch Retina iMac with a 27-inch Thunderbolt Display, although back then it was probably a Mac Pro with a pair of 24-inch Dell monitors).

Much as I like tabs in Web browsers, however, tabbed Finder windows just irritate me. (That’s just me—if you like them, more power to you.) I’m happy to work in a single window in the Finder most of the time, and if I need to move or copy something, I prefer to use multiple windows so I can see the source and destination at the same time. Whenever I double-clicked a drive or Command-double-clicked a folder to get a new Finder window but instead had it open as a tab in the existing window, I’d curse quietly and drag it out to a new window.

You’re undoubtedly thinking, “And he put up with this for nearly seven years?” Embarrassing, I know. That’s mostly because I don’t use the MacBook Air that often—it’s mostly a travel machine—and when I do, I don’t spend much time manipulating files in the Finder. So realistically, while the tabbed windows annoyed me, they did so only a few times per year.

In my defense, I quickly disabled the “Open folders in tabs instead of new windows” checkbox in Finder > Preferences that would seem to control tabbed windows. Alas, it made no difference. Had this been my everyday Mac, I would have dealt with it sooner, but as it was, I never got around to figuring it out. 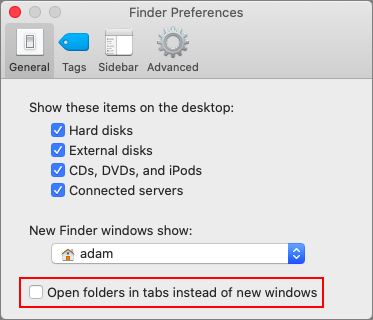 Until now. The SSD in my 27-inch iMac died last week (an ordeal documented in “Six Lessons Learned from Dealing with an iMac’s Dead SSD,” 27 April 2020). While I waited for an external SSD to arrive, I used the MacBook Air in Target Disk Mode to boot the iMac so I could work on my big screens. The tabbed Finder windows drove me batty within the first day, so I started trying to figure out how to disable that feature for good.

The solution turned out to be surprising, at least to me. Apparently, at some point in the distant past when tabbed windows were considered new and shiny, I had also enabled a feature in System Preferences > Dock that preferred tabs to new windows when opening documents. It’s unclear why this setting lives in the Dock preferences, and I can’t imagine why a folder in the Finder would be treated like a document, but there it is.

The “Prefer tabs when opening new documents” pop-up menu was set to Always on my system, and changing it either to In Full Screen Only or Manually resolved the problem with Finder windows opening in tabs. 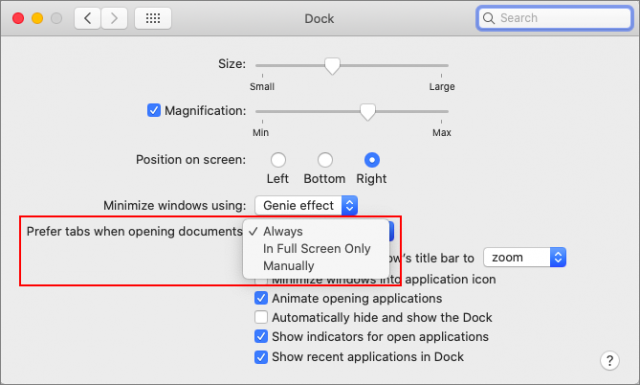 There you have it. I don’t know how many people may have ended up in this situation, but if you’re suffering with tabbed Finder windows, tweak those two settings and you’ll once again be working in windows instead of tabs.