As Amazon and Google have steadily broadened and augmented their smart speaker lines in recent years, Apple’s competing HomePod has remained stagnant. The smart speaker was released nearly two years ago and has been shown little public love since, with the original $349 price dropping to $299, and a typical street price now hovering around $199.

Apple has, at last, expanded its HomePod line. At the company’s “Hi, Speed” event, Apple led off with the $99 HomePod mini, which is essentially just a smaller, cheaper HomePod. 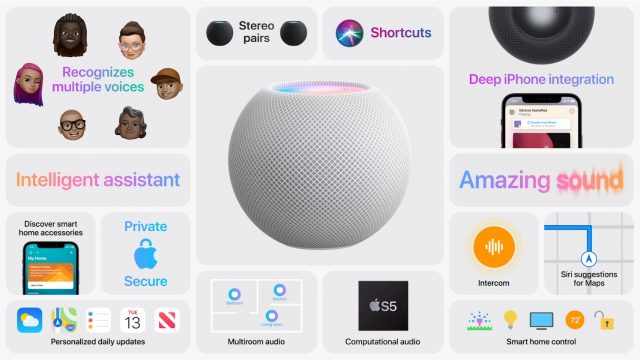 Unlike the cylindrical HomePod, the HomePod mini has more of a spherical shape, albeit with a flattened top where you’ll find familiar touch controls and Siri waveform color animations. Coincidentally, Amazon also recently went spherical with the fourth generations of its Echo and Echo Dot speakers. 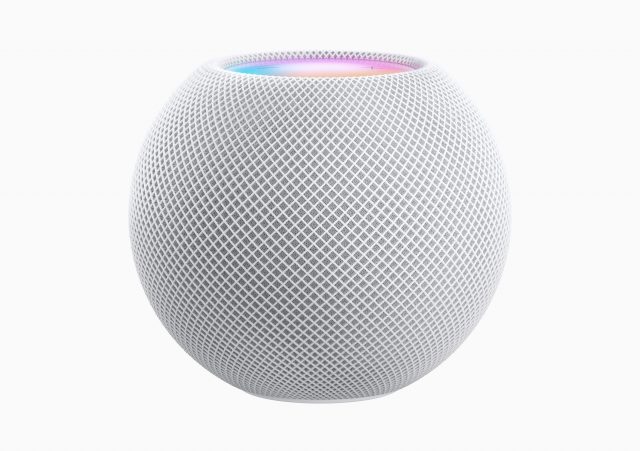 The HomePod mini incorporates an S5 chip that uses “computational audio” to process and adjust sound 180 times per second. (Apple also uses the S5 in the Apple Watch Series 5 and Apple Watch SE.)

The HomePod mini also benefits from a U1 chip that enables a short-range radio technology called Ultra Wideband. (The HomePod lacks such a chip.) The U1 appears to be the key ingredient in an upcoming change to the haptic feedback you get on an iPhone when handing off audio to or from a HomePod mini. The handoff feature isn’t new, but visual, audible, and haptic effects during a handoff will be—assuming this happens with a newer, U1-equipped iPhone, such as the iPhone 11 and iPhone 12 models. In addition, personalized listening suggestions and user controls will appear on an iPhone when it’s near a HomePod; this feature also requires the U1 on both devices. Apple said a future software update would enable these features. 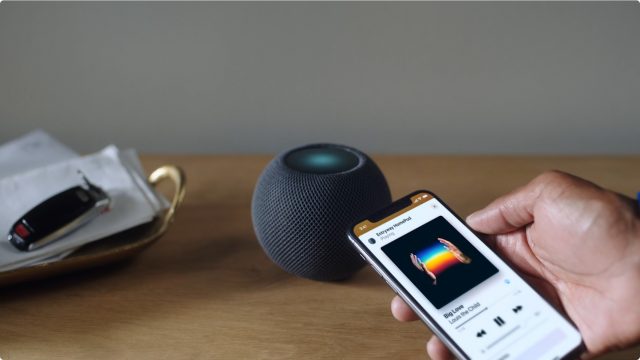 The original HomePod retains some advantages over the HomePod mini. It’s bound to have better sound, based on its hardware specs. Apple says the HomePod mini has a “full-range driver and dual passive radiators” while the HomePod packs a “high-excursion woofer and (an) array of seven tweeters.”

A new feature is coming … only for the HomePod that will add an immersive home theater experience when paired with an Apple TV 4K. To get the 5.1, 7.1 surround, and Dolby Atmos, you need to pair one or two HomePod speakers to the Apple TV. This feature requires the spatial sound support of HomePod, so it isn’t available for the HomePod mini.

Apple announced a new feature for both HomePod speakers and other Apple devices: Intercom. This capability, mimicking ones long offered by Amazon and Google speakers, allows users with multiple HomePod devices to communicate across a residence—one speaker to one speaker, or one speaker to multiples. Intercom should prove useful for announcing to a household that dinner is served, for instance. You can send also Intercom messages to an iPhone, iPad, Apple Watch, and even a CarPlay-equipped vehicle.

On the audio-service front, and also not unique to the HomePod mini, Apple will soon provide support for additional third-party music services, including Pandora and Amazon Music—but, glaringly, not Spotify. (Spotify and Apple are still having a bit of a tiff.)

For a bit of context, the HomePod line is still audio-only while Apple’s competitors have been offering “smart display” products with screens and videoconferencing cameras for a while now. Siri also is a bit of a laggard in many ways compared to Amazon Alexa and Google Assistant.

The HomePod line does have tight Apple integration going for it. For instance, Siri works with HomeKit-compatible home automation devices. And with a more enticing $99 price tag, the HomePod mini is bound to be a hit with those who are invested in the Apple ecosystem, even if entry-level smart speakers from other vendors cost less. We’re curious to see how the HomePod mini’s sound quality will compare to the original HomePod, which is excellent.

You can pre-order the HomePod mini starting on 6 November 2020, with the product shipping beginning the week of 16 November 2020.