Don’t squander precious time manually repositioning and resizing Mac windows over and over again. You can automate such drudgery to a large degree.

macOS offers some help. You’re probably aware of Split View, which puts two windows side-by-side in full-screen mode, and Apple has built in additional capabilities. Third-party utilities give you even more window control. There are many such apps out there, and even general-purpose utilities like Keyboard Maestro can help you move windows around.

One window-positioning utility, Magnet, is a zero-configuration tool that anticipates what presets users want. It was my favorite app of this kind for a long time. Last I checked, the $1.99 app sat atop the Mac App Store’s productivity category.

Another, Moom, lets you customize your window behavior. I weaned myself off Magnet and went all-in with Moom because of its flexibility. You can buy Moom for $10 directly from its developer, Many Tricks, or through the Mac App Store.

Magnet and Moom provide a capability I have envied in Microsoft Windows and Google’s ChromeOS: “window snapping.” When you drag windows to the edges of the screen, window snapping causes them to snap into particular positions and shapes.

More on Magnet and Moom in a bit—let’s look at what macOS can do for you first.

In 10.15 Catalina, Apple simplified the interface. Hover the pointer over a full-screen button and a menu appears with options to tile the window to the left or the right of the display. Choose one of those options, and macOS prompts you to select one of the remaining windows to fill the rest of the screen. That menu also provides an option to make a single window full-screen. That also happens if you tile one window but no additional windows are available to fill the remaining space.

Hover your pointer over the green button while pressing the Option key for a few seconds to see a different set of commands that let you movewindows to the left or right instead of tiling them—meaning the windows are not taken full-screen but simply shifted to one half of the screen or the other.

While you’re Option-hovering, you also get a zoom button that causes a window to fill up the screen (minus the space occupied by the Dock and menu bar) without going full-screen. (In older versions of macOS, you can Option-click the full-screen button to maximize a window.)

I tip my hat to Scholle McFarland for including this information in her book, Take Control of Catalina, especially since so few others have noticed it.

Magnet gets you up and running quickly. Its menu bar presets include icons as well as text descriptors that make them instantly understandable. Magnet’s keyboard shortcuts strike me as difficult to memorize, but your brain might be up for the job. 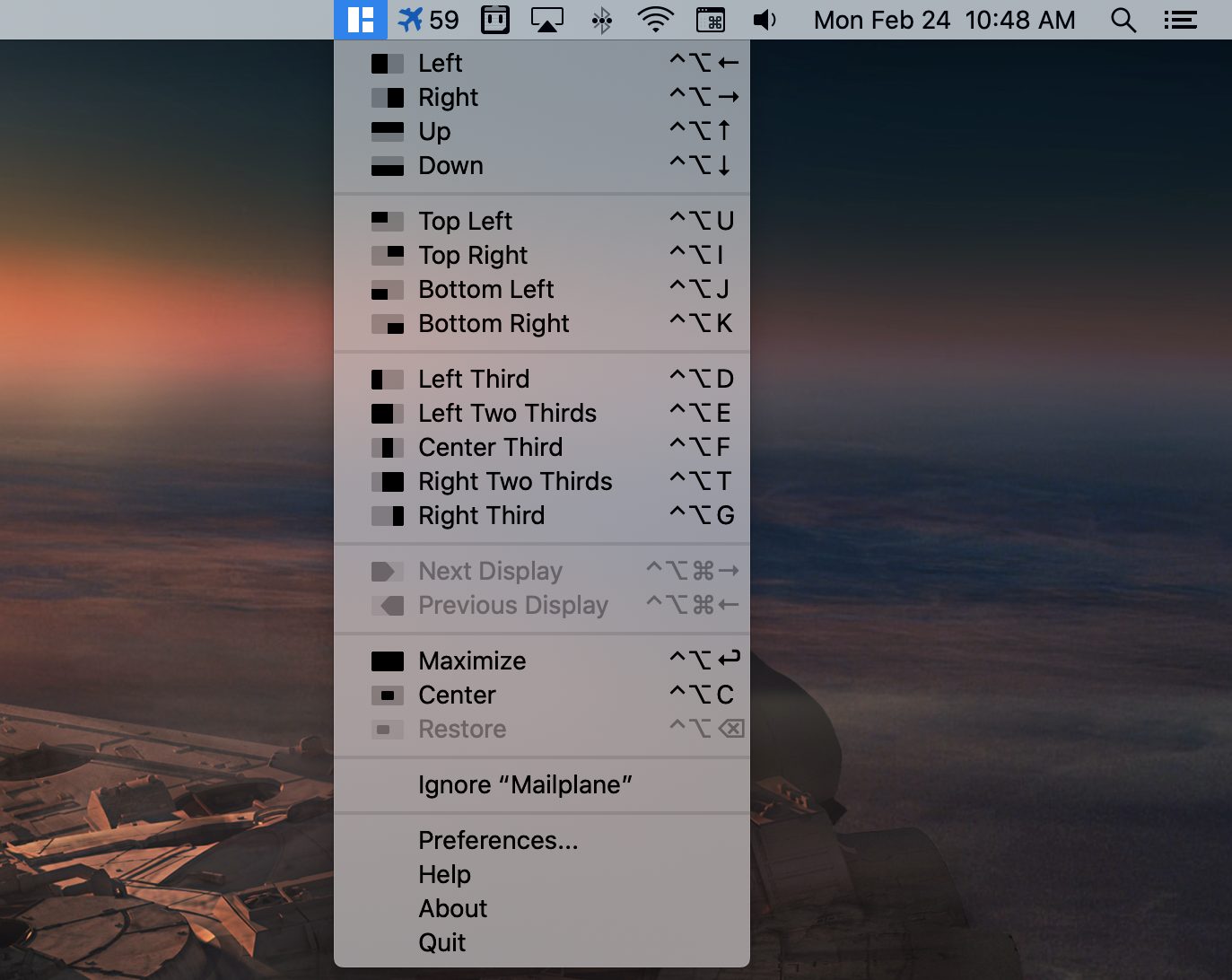 Regardless, you can resize Mac windows as left and right halves, as top and bottom halves, as quarter spaces, as one-third or two-thirds windows, and more, with results that never go full-screen. That’s usually my preference since it keeps the Dock and menu bar visible. If you have multiple displays, Magnet also offers Next Display and Previous Display commands to easily move windows from screen to screen.

For an easier approach, use Magnet’s mouse-based window positioning, which snaps windows into several positions and sizes:

These dragging motions conjure up preview outlines of windows—as in Windows and ChromeOS—to guide you in achieving the desired positioning.

Tweak Moom to Your Liking

Power users seeking greater window-positioning superpowers should give Moom a look. You must be willing to tinker, though, since Moom offers only a few basic features until you customize it to your needs.

You can run Moom as a Dock or menu bar app, but the latter makes the most sense because it simplifies accessing your customized windows-positioning presets.

To get started, open Moom’s preferences and click Custom. You’ll find lots of options, but I suggest you start with Move and Zoom.

You’re presented with a grid that functions as a tiny facsimile of the screen. Drag your pointer across the grid to make a square or rectangle that corresponds to a hypothetical window’s onscreen shape and position. From then on, choose that preset from the Moom menu to position and size any window to those specs. If necessary for more precise positioning, you can tweak the grid’s horizontal and vertical cell density before creating presets. 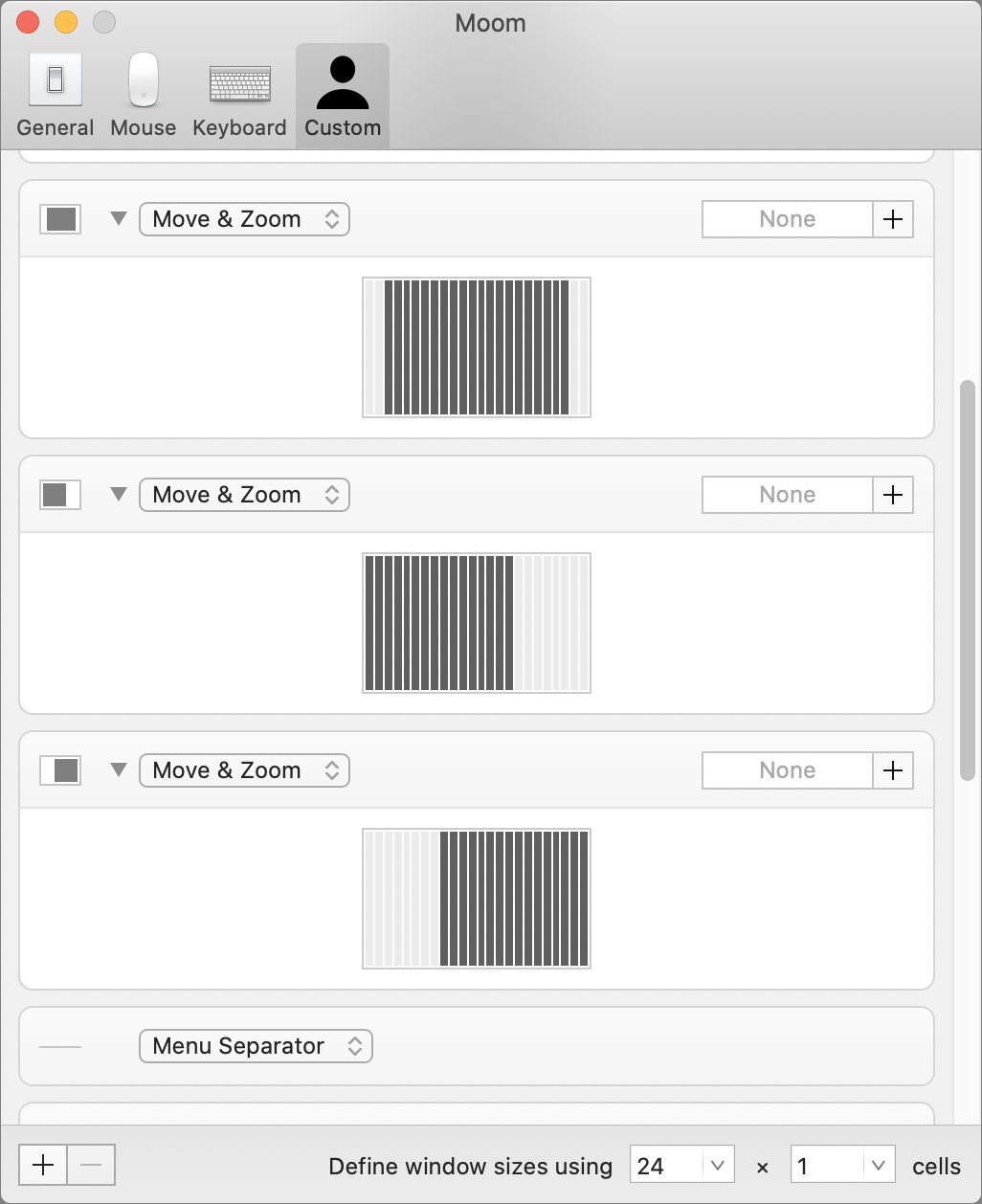 I’ve used this feature to create presets that center windows with a variety of widths—narrower if I am browsing the Web and wider if I am working with others in a Google Doc and need enough room for team comments on the right side. I’ve also created presets that position windows that take up two-thirds of the left or right of my screen.

You can also use Moom to reposition multiple windows at once. I often need a wider Google Chrome window to the left and a narrower one to the right. This was easy to set up. First, I manually positioned two Chrome windows exactly to my liking. Then, I chose the Save Window Layout Snapshot from the Moom menu. From then on, with two Chrome windows anywhere on the screen, I could instantly snap them into my preferred positioning. I also fashioned a preset for left and right Chrome windows of equal size.

Moom even supports scenarios that involve multiple apps. I often like to put a one-column Twitter client such as Tweetbot or Twitterrific on the left side of my display, with a Chrome window filling up the rest of the screen. Choosing Save Window Layout Snapshot saves this configuration in place. After that, when the Twitter client or Chrome is out of position, tidying them up is a cinch.

In addition, Moom takes over the green full-screen button in windows much the way Split View does in Catalina, but with more options in its hover menu. Hover the pointer over the full-screen button and you’ll see clickable icons for left and right halving, top and bottom halving, and maximizing. 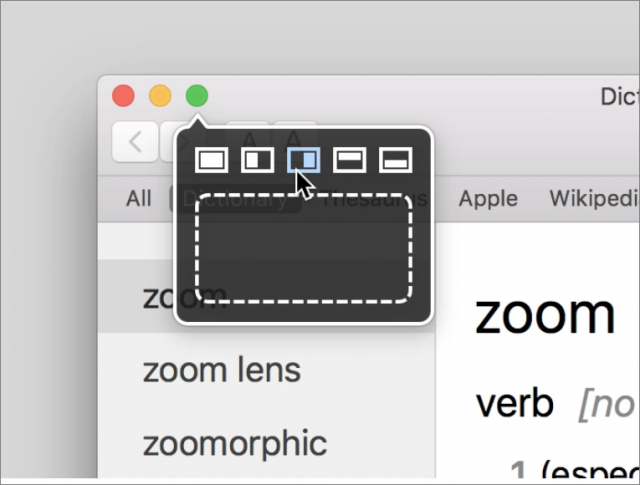 Hold down the Option key while hovering and Moom presents you with quarter-window options. If you pine for Catalina’s default hover menu, press Command (or Command and then Option) as you hover, and its menu will appear.

Wait, there’s more! Moom offers a window “drawing” option via its hover menu. That means you can drag out a rectangle for on-the-fly resizing of your window in the proportions and positioning you want. You invoke this feature in one of two ways, depending on how you have configured Moom’s preferences: 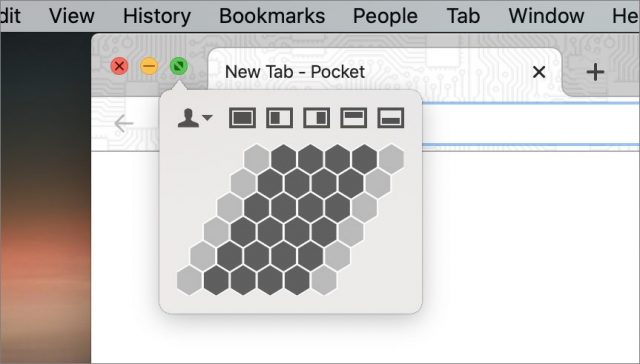 As a bonus, Moom includes window snapping via mouse dragging, but with fewer positioning options than Magnet provides. Moom provides only half-screen, quarter-screen, and maximize options.

Missing from Moom is a Magnet-style option to move windows from display to display with a keyboard shortcut.

I’ve focused on Magnet and Moom because they’re the window-resizing utilities I’ve used the most. Also, based on my research, I believe they offer the best mix of features for maximum versatility.

But I’d be remiss if I didn’t point you to a few other options.

Given the abundance of window-resizing utilities for macOS, there’s no reason to move and resize macOS windows manually all the time. If you find yourself constantly fiddling to get all your windows in just the right spot, macOS’s built-in controls or one of these utilities might be just the thing.

Some people will be satisfied with macOS’s native window-positioning features, which Apple improved in Catalina. If you want more, I recommend Moom because it offers a good mix of features along with a ton of customizability. For those with less inclination to tinker but who still wanting versatility, Magnet is a fantastic—and inexpensive—option.

Regardless, you have the tools at your fingertips to increase your Mac efficiency.