made an embarrassing technical mistake that required an apology for wasting someone’s time. My error? Using Siri to schedule a Zoom call with two colleagues on the board of the Finger Lakes Runners Club while relying on Google Calendar as my default calendar service. Here’s what happened.

We coordinated the time for the meeting in email at the end of the day, but I was in a hurry to finish and forgot to add it to my calendar right away. Instead, as is often the case, I remembered when I was making breakfast the next morning. Since the meeting was for just a few hours later, I didn’t trust myself to remember to start the Zoom call without it appearing on my calendar, with a reminder popping up at the right time. Pressing the Apple Watch’s digital crown, I instructed Siri, “Schedule a call with Mickie and Gary for today at noon.” 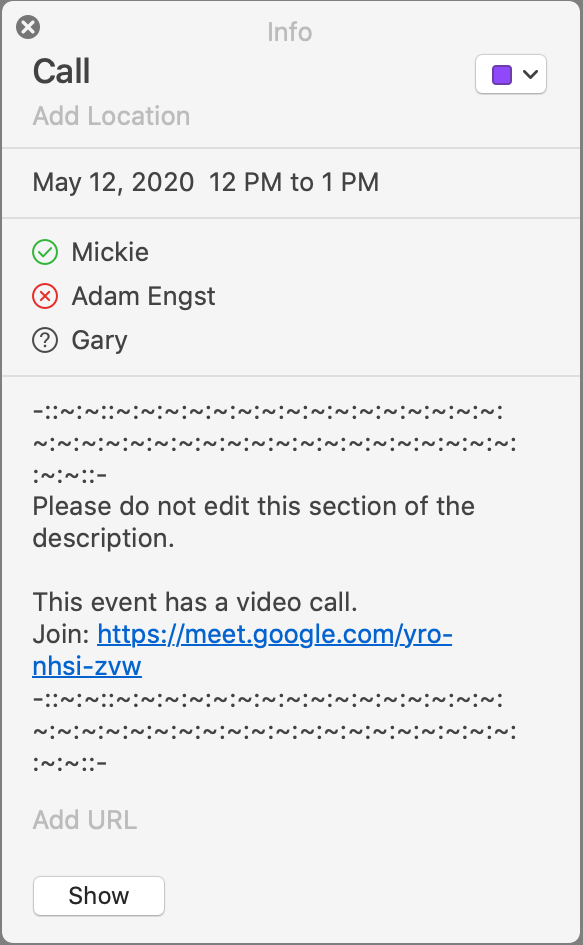 Siri on the Apple Watch understood me correctly, but I should have thought more about the fact that it asked me which Gary I meant—I know a number of people named “Gary” or “Garry.” I tapped the option corresponding with the correct Gary, noticed with some irritation that Siri had created an event merely titled “Call,” and went back to making breakfast. I figured that I’d know what “Call” meant when the reminder came up, even though I wanted it to read “Call with Mickie and Gary.” After breakfast, I sent the Zoom meeting details to Mickie and Gary in email.

At noon, I started the call, and Mickie joined a minute later. We chatted for a while before wondering where Gary was. A few text messages later, and he came on, irritated, asking why he had been sitting in Google Hangouts by himself for 10 minutes. Google Hangouts? Why was he in Google… suddenly, it all became clear, and I immediately apologized for wasting his time and explained the situation.

When I used Siri to create the calendar event for the call, because I specified Mickie and Gary by name, Siri tried to be smart and invited them to the event without telling me. I didn’t want that to happen—the event was for my reference, not because I wanted to put it on their calendars.

(This is a general complaint. Speaking as someone who doesn’t work in a large organization, calendar invitations make me uncomfortable. I never quite know when they’re being sent, or in what manner, or how the recipient will respond. As a writer, if I’m going to invite someone to an event, I want to do so using language I control. Plus, when I receive invitations, I don’t know what will happen if I accept, reject, or ignore the invitation. I’m sure invitations work better in groups that rely on shared calendars for frequent meetings, but I’d love a switch to disable them entirely.)

The second part of the problem stemmed from the fact that I use Google Calendar for my main shared calendars. That’s because, when he was in high school, Tristan’s main computer was a Chromebook Pixel, so we standardized on Google Calendar for our shared calendars. I also sometimes appreciate the fact that Gmail can automatically add events to my calendar, although it can get wacky with airplane flights, particularly those that cross time zones. Now that he’s at Cornell (and thus much less in our calendar) and using a MacBook Pro, we could switch back to iCloud.

As a result, when I scheduled the call using Siri, it created the associated event on a calendar in Google Calendar. In itself, that wouldn’t have been a problem except that, by default, Google Calendar automatically adds video calls to events I create with other attendees. Oops! You can disable this default in Google Calendar’s General settings; while viewing Google Calendar in a Web browser, click the gear icon in the upper-right corner, choose Settings, and click Event Settings. 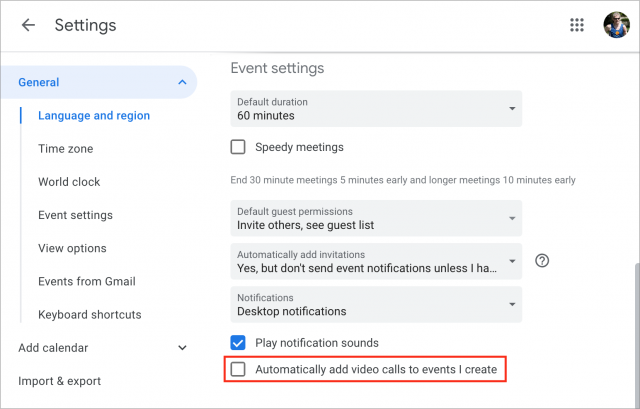 It all makes sense, and I can see why programmers working in large companies like Apple and Google would assume that everyone would want event invitations—their days undoubtedly involve a continual flurry of invitations to accept and reject. And the Google Calendar team probably thought they were doing everyone a favor by providing single-click access to a video call right within the invitation. At least they provided an option to disable it.

If you’re like me, however, and see your calendar as essentially private, all I can suggest is that you either avoid using Siri to create events, which would be a loss, or train yourself never to mention a contact’s name when creating an event. That’s what I’ll be doing from now on. Live and learn!