macOS will have a different overall look and feel in Big Sur (see “Apple Takes macOS to Big Sur… and to 11,” 22 June 2020), but Apple hasn’t ignored its key apps. Maps and Messages get long-overdue overhauls, while Safari adds privacy-reporting features and more locked-down extensions, and Photos and other apps receive minor tweaks. A grab bag of other changes will appear, too, such as facial recognition in the Home app that links the Photos app and home security cameras.

We assume Mail for Big Sur will change somewhat, too, based on details shown for Mail in the iPadOS preview. But Apple didn’t demonstrate Mail for macOS in the keynote or include it in the initial feature list.

In many ways, Messages hasn’t changed much from its long-ago origins. Apple has tweaked elements and tacked on new features, but Messages remained a list of conversations at left and individual messages at right.

In Big Sur, Messages changes its focus from text messaging to something akin to threaded group-messaging software—it begins to look much more like Slack. You can @mention someone in a group chat to highlight them and set up your own notifications to get alerts only when you’re @mentioned. Replies can be threaded in groups, too. Groups can also get their own avatar, which can be a photo, Memoji, or emoji, and it’s shared across all group members.

Instead of a simple chronologically organized list of conversations at left, you can now pin important conversations at the top—a total of nine that sync across iOS, iPadOS, and macOS. As actions happen in pinned conversations, indicators—including the Tapback reaction icons—appear above the pin. In a group chat, messages since you last checked are indicated by a ring of icons corresponding to other members in that conversation’s list item. 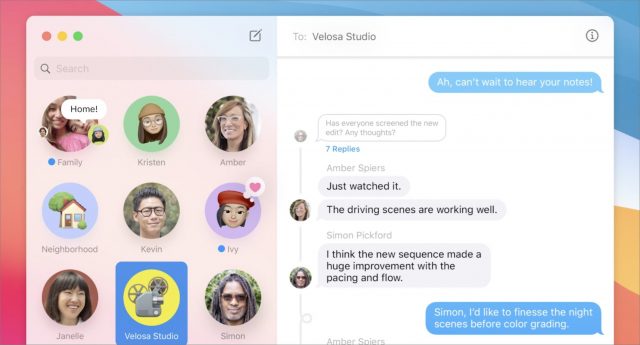 Search has been a wasteland in Messages for a long time, and Apple has brought finding text (including phrases), links, and photos into a more comprehensive and usable set of results.

Messages adds a missing feature by letting you share your name and photo with another party who doesn’t have you listed by your iMessage email or phone number in their contacts. It has always been mystifying to people who receive their first iMessage from you, even an expected one, in that way. You’re given a variety of options to control how you share that information: you can disable it, share it with everyone, or just with people in your contacts (who ostensibly lack you in theirs). You can also choose to push it to another party when you start a conversation or only after they reply to you.

Because Messages is used heavily for social and family purposes, Apple has boosted the fun quotient, trying to meet features found in other popular messaging apps. A sort of “intensity” control lets you can control how “loudly or gently” you send a message to produce a similar effect on the recipient’s side—teens can “slam” a message to their parents, which I am sure will be greatly appreciated. (Insert sarcasm emoticon here.) Apple also lets you add popular images that are trending on social media, something familiar to Twitter and Giphy users. Memoji have become more nuanced, letting you design one that resembles you even more closely than in previous iterations, as well as creating stickers you can share and use. To fight fire with fire, whatever.

Finally, the media picker in macOS in general and Messages in particular has been poor for some time. Apple has enhanced that to make it easier to select recent photos and albums to share in messages.

Apple has focused more on improving its Maps app and mapping data in iOS and iPadOS, which makes sense given those devices are mobile. This has left Maps for macOS trailing behind. Big Sur pushes Maps into something closer to parity with its mobile siblings, while adding new features that will be found in all operating systems.

This lets you take better advantage of a large screen for research and previewing. When you go mobile, you can shift routes or details to your mobile device, or pull it up via iCloud syncing.

Many changes relate to planning and visualizing your route or the area you’re heading to before you begin a trip. Electric-vehicle drivers can plan a route that both includes charging stations and calculates charging time. With iPhone and electric car integration, Maps for macOS can provide more precise information based on current charge and the type of charger used by your car. We’re uncertain if this will require dropping tens of thousands of dollars on a new car, as so often seems to be the case with freshly integrated automotive features.

Cyclists get a promotion to first-class citizens, including details of how busy streets are and elevation, necessary calculations for riders. You can transfer planned routes to an iPhone for navigation while riding. 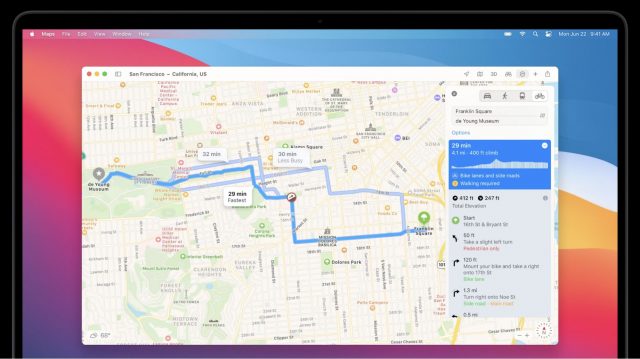 In the future, when we once again travel recreationally, new Apple Guides created by partner travel companies offer shopping, food, cultural, and entertainment suggestions. You can also create your own and share them with people you know. One of the best ways I’ve found to prep for a trip is to get some ground-level views. For some cities, Apple now offers interactive 3D 360-degree panning around and along city streets.

The new Maps incorporates indoor features, too, so you can figure out where in a mall—to the extent that malls continue to exist—you can find a given store. Apple highlights the issue, too, of figuring out if a restaurant an airport is located before or after security.

As more cities manage traffic with congestion zones, which can limit which cars may drive on certain days or include tolls for entering the zones, Maps now includes them—and lets you route around them where possible. In China, you can enter your license plate number to check if you have access to drive through urban areas that restrict entry. (Apple noted that license plate data is stored securely and only locally within the Maps app.)

Maps for macOS also gains an iOS 13 feature to share your ETA. You can tell other people when you expect to arrive, and they can receive an updated time and follow your journey with your permission. While you’re highly unlikely to lug an active laptop with you while in transit—even tethered via an iPhone or iPad—this addition lets you start sharing from your Mac and then handle location updates from your mobile device.

Safari has seen more updates than nearly any other Apple app for macOS in recent years, with consistent streams of largely under-the-hood improvements, particularly in restricting unwanted tracking and ad-technology targeting. Big Sur goes deeper on privacy, but adds support for a new category of extensions—or, rather, welcomes them back—and has a number of more modest interface changes, too.

Apple’s privacy features in Safari are extensive but largely hidden. A big chunk of my book Connect and Secure Your iPhone and iPad picks apart all the features and explains how they work, as there’s little way to see them in action. With Big Sur, Apple added privacy reports, so you can understand exactly what actions Safari is taking on your behalf.

A general Privacy Report shows the last 30 days of trackers that Safari has blocked with Intelligent Tracking Prevention, which blocks trackers intended to follow you across different Web sites. You can also look at a summary for each site you visit, which lets you understand—and potentially complain about—practices engaged in by the site. Apple notes you can add a Privacy Report as a start page and see it every time you open a new window or tab. 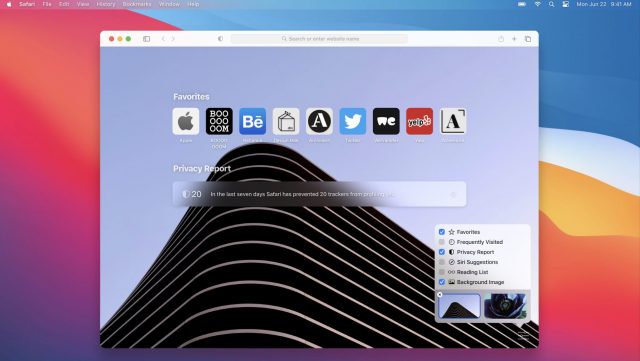 Safari now integrates with a not-yet-disclosed tracking database of password breaches, and it alerts you if any account for which there’s a password stored in Safari is connected with data breaches that have become public. Billions of account records have been disclosed in recent years, and many people reuse passwords across accounts, as much as we don’t recommend it. Safari includes tools for updating passwords found in breaches. (Apple, like 1Password, may be relying on the massive database run by Have I Been Pwned, an Australia-based effort operated by a security researcher.) The new Safari can also import saved passwords from Chrome, along with bookmarks and your browsing history.

Apple has shifted its approach on third-party extensions to Safari once again in Big Sur. Its first formal system in 2014 relied on JavaScript and Web technologies, making it accessible to a larger group of programmers than those developing Mac apps with Objective C. For security and other reasons, Apple started restricting this approach in 2017 and eliminated it in September 2019 with the release of Safari 13 for old macOS releases, and shipped the next month as part of 10.14 Mojave.

In Big Sur, Web extensions are back—and seemingly far better than before. Apple says it has adopted common specifications from the three other major browsers—Chrome, Firefox, and Edge—and will offer conversion tools for developers of extensions for those browsers to bring them easily to Safari for macOS. (Safari 14 will also support these extensions in Mojave and earlier compatible macOS releases.)

Apple will continue to support native extensions for Safari and will spotlight them with a separate section on the Mac App Store. Currently, extensions are mixed in with other software, and it can be hard to find them. These native extensions can access more advanced capabilities than Web extensions and, like all App Store items, pass Apple’s review process, are cryptographically signed, and are delivered only by Apple.

Instead of allowing extensions to work everywhere by default, Safari in Big Sur adds them to site-specific controls. You can approve extensions to work on a site-by-site basis, like pop-up windows, downloads, and location acquisition. This includes a pop-up menu that explains the access you’re granting to an extension, which is currently found only in Safari’s site preferences. An extension grant can, like location, be for a day or forever. Access can be revoked through preferences, too. (We haven’t seen the precise settings yet, but it’s likely you can mark an extension as approved for all sites, too.)

For those of us who like to keep only one Safari window with many dozens of tabs open, Big Sur lets you hover over a Safari tab to see a quick preview of the hidden page. Safari also displays tabs more efficiently, letting you see more at a glance in a single window. Apple promoted in its Big Sur announcement the appearance in tabs of favicons—the tiny icons Web sites show as little logos in the Location field. However, that has been a feature since Mojave, turned off by default. As far as I can tell, it’s now just turned on. 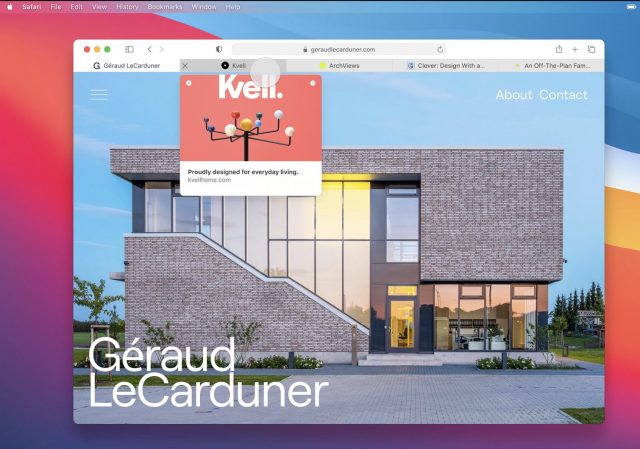 An interesting new feature available in beta at release lets you translate pages within Safari, instead of visiting a third-party site or copying and pasting text. A translation icon appears for sites that note in their underlying HTML code they’re in a language other than the one set for your operating system. Click it to translate into English, Spanish, Chinese, French, German, Russian, or Brazilian Portuguese.

A Potpourri of Improvements to Other Apps

Apple doesn’t leave other apps behind, though it’s likely the list of apps and changes to them will grow en route to Big Sur’s eventual release.

A Grab Bag of Other Big Sur Changes

Apple says Big Sur will ship “this fall,” with a public beta to come in July 2020. We’re betting on the usual September or October date, and we sincerely hope that Apple has resolved its quality control issues from Catalina (see “Six Reasons Why iOS 13 and Catalina Are So Buggy,” 21 October 2019).