If you’re a regular reader of my coverage of CES, you might have noted a trend: my first story opens with some variation on “welcome to the annual trade show for consumer electronics,” while I try to open every other story with some anecdote emphasizing the size or strangeness of what’s on display.

This year is different, as I’m writing this story en route from Milan to Verona—the cities in Italy, not two new hotels on the Las Vegas Strip. (Considering that the Strip features a Venetian, Paris, and New York, it’s easy to get confused.) I had conflicting conferences this year, so my CES trip was abbreviated: long enough to see plenty, but nowhere near enough time to see everything. This travel schedule is also why my coverage this year has been unfortunately delayed.

The simple solution: if a gizmo, gadget, or announcement took place only on the floor in the Las Vegas Convention Center, I missed it. This year’s coverage covers events at the three breakout shows (CES Unveiled, PEPCOM Digital Experience, and ShowStoppers) and booths at the Venetian: the Sands Expo and Eureka Park. These spaces regularly have the biggest bang for the buck regarding footsteps per day converting to things worth writing about—but for a CES completist like myself, I regret losing some of the serendipity that comes from wandering. More to the point, don’t read a negative appraisal into something you might have read about elsewhere that’s omitted here. It’s never possible to see everything, but this year more than most, most of the exclusions are due to geography.

Flying cars are expected to become reality sooner than we’re likely to be ready for them (see “CES 2020: Tech Trends to Watch,” 7 January 2020), and while I have no idea if Aeronext will be part of that, I have to admit its design is nifty. The proposed Flying Gondola is a quad-rotor vertical takeoff and landing (VTOL) vehicle with an enclosed cab that carries people. (In its first year of production, likely brave people.) Right now Aeronext has a one-third scale model of its interim product, a Gondola (more of a bathysphere) that carries only a single person. My bet for the first successful product in this arena is whichever one partners with Uber or Lyft and makes flying a rideshare; Aeronext is probably better set up to do that in Japan rather than the United States. I’m mentioning Aeronext because of the design, but also because its branding is in keeping with this year’s Italian theme, and the video of the model at the link is nice, but this illustration is wonderfully insane. 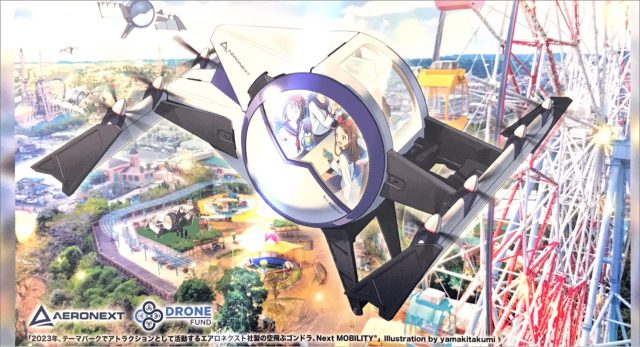 I was a fan of the AirSelfie drone the first time I saw one (see “CE Week 2018: New Tech at “CES East”,” 29 June 2018). It’s a drone-based camera the size of a deck of cards, suitable for carrying in a pants pocket until aerial photography is of interest. The company has announced two upgrades, both due later this year. The Air Pix+ takes 12-megapixel photos or 1080p video, but only briefly: it has only 8 GB of onboard memory and flight time is 6 minutes. The Air Duo is made out of aluminum (rather than durable plastic) and will have both front and bottom-facing cameras, with an extra minute of flight time and 16 GB of memory. No pricing was announced, but the original Air Pix debuted at $199 and now costs $99.95. An optional Powerbank carrying case includes a 3500 mA battery and automatically recharges for the next flight, it’s $39. 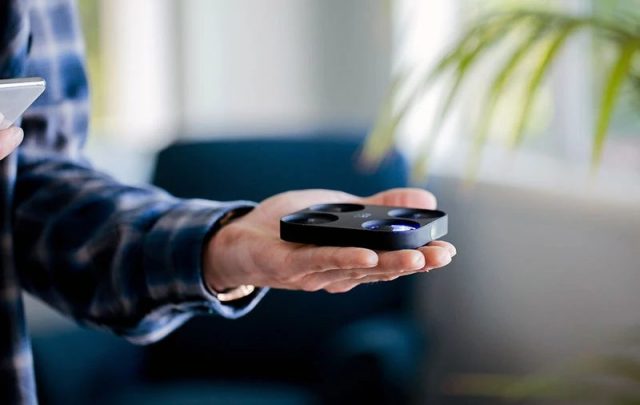 I’ve seen any number of belts, shoes, and bracelets designed to detect when an elderly person has fallen and can’t get up, but the CarePredict @Home Tempo Series 3 goes much further than that. It’s a wrist-sized device that can be worn on an included band or in a pocket, and it comes with four beacons that are placed around a senior’s home. Aside from emergencies like fall detection, the Tempo tracks the wearer’s habits and alerts family or caregivers if there are changes that could indicate an underlying problem: fewer or more trips to the bathroom, a missed visit to the kitchen indicating a missed meal, or more time spent in bed. CarePredict claims that tracking and responding to these changes early can prevent falls, malnutrition, depression, and urinary tract infections. The company is researching other maladies that correlate to pattern changes and will roll out those monitoring services when it can demonstrate efficacy. But you’ll pay for this level of tech smarts: the Tempo costs $449 with a 45-day money-back guarantee and 30 days of service, which costs $69.99 a month afterward.

Teaching kids how to code is a crowded field at CES. I’ve seen at least a dozen products and services designed to turn young children into master programmers for parents who aren’t already reading their kids bedtime stories in JavaScript. Life Is Tech’s approach to the market resembles genius: it has licensed a panoply of Disney characters and movie scenes for its Disney Codeillusion coursework, and for the first 1000 people who sign up, the ridiculously popular Frozen characters are the free trial. At the time of this writing, the trial is still open. It includes one of around 125 lessons from the full course, which teaches HTML, CSS, JavaScrlpt, and “processing” (whatever that might be). Each lesson takes approximately 30 minutes, so this is a rather deep dive into a long course of study, but given the trappings, many kids won’t think of it as work. The full course costs $1999 with a $65/month payment option. 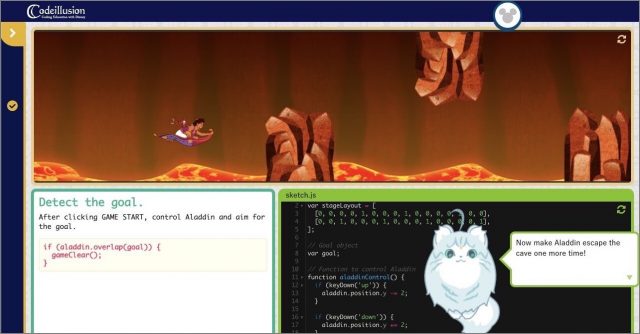 I nearly passed on the IEVA booth because its imagery and tagline, “the jewelry that takes care of you,” implied a certain kind of lifestyle brand that I skip. A closer look, however, revealed the Time-C, a smartwatch with an analog dial. Like its jewelry cousins, which seem to be varieties of pendants, the Time-C’s design hides a large number of sophisticated sensors that monitor you and your environment. In addition to the de rigeur heart rate and activity tracking, the sensors record skin temperature and calorie counts. It also picks up on indoor and outdoor pollution, UV index, luminosity level, ambient noise, and pollen counts. You view these readings on a companion iPhone app. When it comes out at the end of the first quarter, the Time-C will be finished in “vintage metal” and rose gold, and will retail for $490. The company’s pendants come in many varieties, but some have fewer sensors than the watch. My materials state they all tell the time, but I can’t discern where the screen is. Currently shipping pendants in the Twin-C and Twin-C to Go series range in price from €119.50 to €229.50; newly announced models coming in 2020 range from €149 to €278. 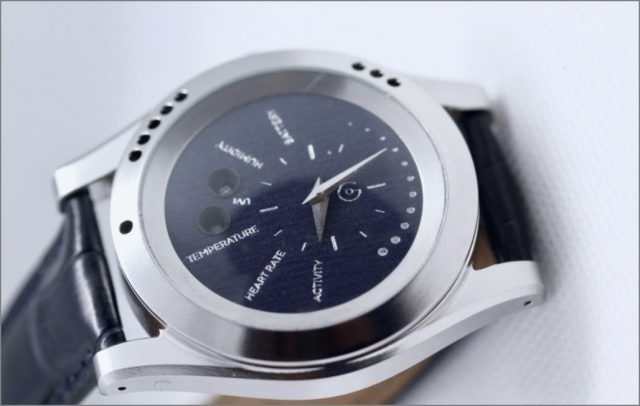 Jabra’s Elite 75t earbuds are ranked as the best wireless earbuds by my preferred review site, Wirecutter, and the company’s Elite Active 65t headphones take top marks for workout headphones. So you may understandably be interested in the impending release of the new Elite Active 75t. These earbuds are 80% the size of the Elite Active 65t and sport nearly double the battery life at 7.5 hours, with three more full charges in the case. They are waterproofed to IP57. They have noise isolation from the fit, but not active noise cancellation; a “HearThrough” mode lets ambient sound come through. They will be priced at $199, with various color options coming available between February and April 2020.

Jabra is also releasing two software updates in Q2 that will retroactively work with some headsets, although the company does not indicate how far back their compatibility will reach. Jabra MySound will work with an iPhone app to calibrate music frequencies to the individual hearing of the user, while Jabra MyControls will allow each earpiece to be used individually, effectively doubling the battery life outside of the case. 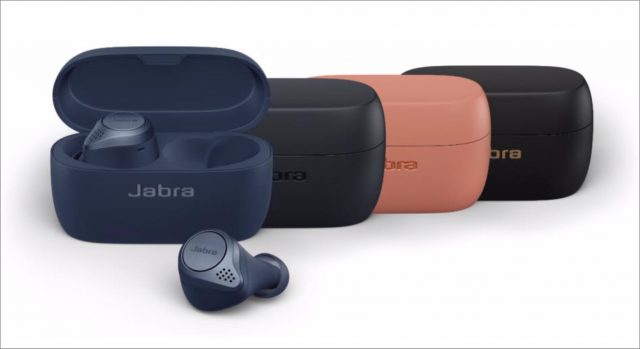 Snorers can tell you that many companies (and surgeons) promise to fix the problem, but no technique works for everyone, and many people have tried and failed with many products. The Motion Pillow might be another such product, but it looks promising. It looks like a standard ergonomic pillow, with foam curvatures, but attached to a plastic box of sensors. The sensors analyze the pattern of your snoring and come up with a unique pattern to apply to airbags in the pillow, which will gently rotate or move your head slightly to keep your nasal passages open. The Motion Pillow is slated to ship in May, and you can order it now on Indiegogo at an early bird price of €264, a 30% discount off of the retail €378. 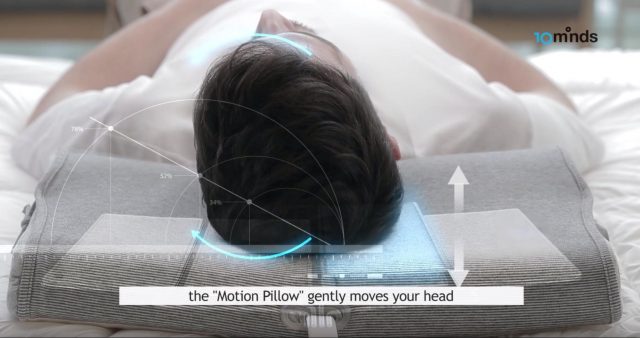 MyFit might be a cheaper solution for audiophiles who want a particular kind of headset, but need to find a different model because it doesn’t fit well in their ears (ahem AirPods cough). Hold an iPhone running a free app up to your ears and it will make a 3D scan of its contours. Then you send that scan and which headphones you use to MyFit Solutions, and 7–10 days later you’ll have two custom sets of silicone ear tips shipped from France. MyFit supports only a subset of headsets, though, and at an introductory price of €65, it’s not worth the expense for cheaper headsets.

I can think of two times I’ve walked up to a CES booth and thought, “I need that right now.” The first was the PogoCam, a camera that attached to eyeglasses, which worked poorly in the real world (see “CES 2017: From Laundry to Play-Doh at Showstoppers,” 9 January 2017). The second is the OhSnap iPhone grip, which would have solved a problem I was having at that moment. The OhSnap is a fabric loop attached to a plate, which in turn attaches to an iPhone or case; put your finger in the loop for a secure grip on the camera. The genius part: the loop can slide up and down the plate or rotate, allowing the demonstrator to flip his phone around like a carver at Benihana. More to the point, it’s easy to make any part of the screen accessible for one-handed thumb access, and switching from portrait to landscape for photos is a cinch. Better yet, the plate can be attached to any magnetic holder, converts into a kickstand, and barely changes the thickness of the iPhone. Shipping now in nine colors for $29 direct from OhSnap. 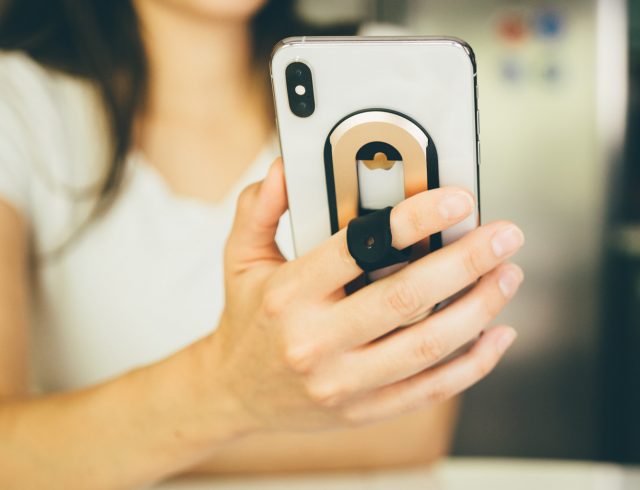 CES is infamous for products of dubious effectiveness designed to help you communicate or take care of your pets, and frequently I’ll cover one as that article’s item of mockery. Not so the SpotOn virtual fence. It’s a dog collar with built-in GPS and cellular connectivity. Use an app on your phone to draw out the lines of a fence on a map, and that virtual fence suddenly exists for your dog. Included training programs give you the option of using “static correction” (apparently the military euphemism for “dog zapping”) when a boundary is passed, positive feedback (the app alerts you to your dog’s compliance and you give it a treat), or a mixed mode. Whichever training you use, the app also supports “Find My iDog,” whether Rover is inside the fence or on walkabout. The feature I liked best is that you can have up to ten virtual fences saved, so you can use a few at home and nearby parks, with several more that you set up on the fly when traveling with your pooch. At $1495 (plus $6.95/month for service after 60 days), SpotOn is not cheap, but I’m told it’s competitive with fixed-location virtual fencing. 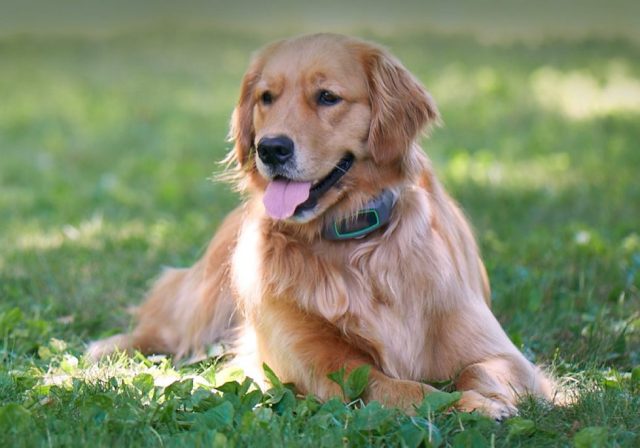