It has been years since Apple last shipped a Mac that had an internal optical drive, yet both the Magic Keyboard and Magic Keyboard with Numeric Keypad still include an Eject key. And many people still have older MacBooks and keyboards with Eject keys. But if you don’t have an Apple USB SuperDrive, that Eject key sits quietly—sad, lonely, and untouched (unless you like pressing Control-Eject to bring up a dialog with buttons for Restart, Sleep, and Shutdown, or Control-Shift-Eject to sleep the screen). For the rest of us, this is where Dave DeLong’s clever Ejector app comes in.

Ejector is incredibly simple. It runs in the background, and when you press the Eject key, a window opens showing all ejectable volumes. Choose one and click Eject, or you can use the arrow keys to select a volume and press Return to eject it. No need to lift your hands from the keyboard! 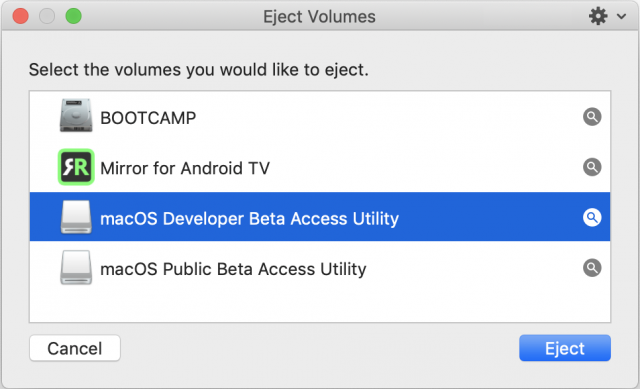 No Eject key on your MacBook Pro? No problem, because Ejector also supports the Touch Bar, displaying an eject button in the Control Strip. Alas, if you have a Mac that lacks either an Eject key or a Touch Bar, you’re out of luck—there’s currently no way to connect the eject action to a key of your choosing. However, if you have a macro utility like Keyboard Maestro, you could assign the Ejector app to any key combination.

What can you eject? DeLong lists “partitions, disk images, network drives, or external drives.”. In short, you can eject any mounted volume other than your boot drive. As always, if there are files (even invisible ones) open on a volume that you want to eject, macOS won’t let you eject it. If that’s the case, press the Option key while ejecting to force eject. 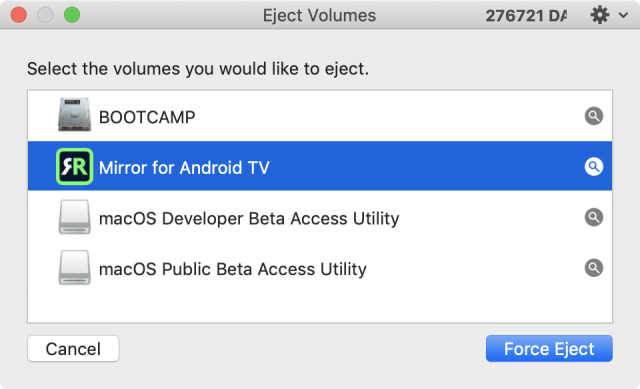 There isn’t anything else to the app, which might make you balk at its $9.99 asking price, though there is a 7-day free trial. But no one can accuse DeLong of greed since he’s openly asking Apple to “Sherlock” his app at the bottom of Ejector’s Web page, and even includes a Radar link that Apple developers can follow to formally request the feature from Apple.

Here’s a quick tip that might save you from some confusion. When I first downloaded and opened Ejector, nothing happened on either my High Sierra or Mojave machines. After checking DeLong’s Twitter feed, I discovered the problem: Ejector doesn’t launch correctly if you leave it in the Downloads folder. After I force-quit Ejector in Activity Monitor and moved it to the Applications folder, it worked fine. DeLong has acknowledged the issue and said he’ll fix it in an update.

As a bonus tip, what if you have an Apple USB SuperDrive but lack an Eject key? You can usually drag a mounted CD or DVD to the Trash to eject it, and Apple also provides a menu extra that puts an Eject menu in the menu bar, from which you can select a Superdrive to eject its disc (with tray-based drives, it can also open the tray). Alas, unlike Ejector, it can’t eject other types of mounted volumes. To install the Eject menu extra, navigate to /System/Library/CoreServices/Menu Extras and double-click Eject.menu.