As an Apple software engineer, I worked on the first two releases of watchOS, so I’m familiar with many of the Apple Watch’s internal trade-offs. While I don’t have any inside information about current versions of watchOS and Apple Watch hardware, there are at least four reasons to think Apple won’t support third-party watch faces any time soon, if ever.

The main reason Apple doesn’t allow third-party watch faces is battery life. On the Apple Watch Series 5 and Series 6, the watch face is displayed almost all the time. It’s vital that the code driving the watch face consumes as little power as possible. Apple engineers go to great lengths to ensure the watch face code is power-efficient.

These efforts go well beyond simple tricks like hiding the second hand when the face dims since animation takes more power than a static display. Apple engineers have intimate knowledge of how watchOS displays graphics and how the Apple Watch’s GPU works, and for better or worse, this information is proprietary. They know which graphics techniques use the least power. Their animation techniques are the most energy-efficient possible. They have access to private graphics APIs that aren’t available to third-party developers. And they have internal testing and measurement tools that the company doesn’t provide to third-party developers.

The Apple Watch doesn’t achieve all-day battery life by accident. Apple engineers spend thousands of hours fine-tuning the code to be power-efficient. Every night, Apple’s automated build system creates a new build of watchOS, called the daily build, using the latest code changes checked into source control. (This is true for all Apple operating systems; see “How to Decode Apple Version and Build Numbers,” 8 July 2020.) Apple engineers use the daily build, so they’re all running the latest version of watchOS.

The daily build is also loaded onto a rack of Apple Watches in the power testing lab. They run through a set of scripts that simulate normal use to see how long the batteries last. The results are published to an internal Web dashboard that tracks battery life for every watchOS build. If battery life goes down, engineers are assigned to find out why and to fix it. Battery life is an obsession with the Apple Watch team.

No matter how capable or diligent they might be, third-party developers simply won’t have the internal graphics knowledge, the private API access, or the test tools to be as rigorous about battery life as Apple demands. If Apple were to open up watch-face development to third-party developers right now, battery life would almost certainly decline, which would make for a worse Apple Watch experience for users.

The watchOS code that drives the watch face runs 24 hours a day, for months on end. It must be as utterly bug-free as possible. It’s unacceptable to glance at your watch and find the face has frozen, crashed, or has a visible glitch. The Apple Watch team does a tremendous amount of testing on watch code. Those engineers run automated tests, manual tests, and recruit thousands of Apple employees to use beta copies of watchOS and report any problems.

In my years working at Apple, I developed a deep respect for Apple’s Software Quality Assurance (SQA) engineers. They do a tremendous job. When software ships with bugs, it’s usually not because SQA didn’t report a problem, but because the schedule didn’t allow time to track it down and fix it (see “How to Report Bugs to Apple So They Get Fixed,” 17 June 2020).

Only the largest third-party developers, like Microsoft and Google, have equivalent testing resources. Smaller developers probably can’t guarantee the quality required for watch face code. And even if they could, it wouldn’t be economically feasible for them to spend that much time testing watch faces, which would quickly become a commodity in the App Store. Nor does Apple want to take on that level of testing itself as part of allowing third-party watch faces into the App Store.

It’s an understatement to say Apple is highly image-conscious. Apple obsesses over every detail of its public persona, from the Mac Desktop background to iPhone colors, and even extending to the exact shade of wood in Apple store tables. Steve Jobs examined dozens of shades of white cables before selecting the particular shade of white in the iconic iPod and iPhone earbuds.

The watch face is the public facade of the Apple Watch. It’s what everyone sees when they spot someone wearing an Apple Watch. It must be beautiful, contemporary, and polished.

There are certainly some third-party developers who create beautiful apps. However, as you browse through the App Store, you also find plenty of apps whose design is uninspiring and many more that are outright ugly.

Apple does not want the Apple Watch sporting a gaudy, grating, or downright dissonant face, even if that’s what you might like. Nor does Apple want to be in the business of deciding which watch faces are stylish enough to appear on the watch. Apple thinks its own designers do a fine job of creating a wide range of highly customizable faces, and it adds more faces with each watchOS update.

If there’s one department within Apple that you don’t mess with, it’s Apple Legal. Apple doesn’t want to waste time and money fighting copyright infringement lawsuits over watch faces. Many classic watch faces, like the Hermès face that Apple licenses for the Apple Watch Hermès, are copyrighted. Vintage faces were also designed before smartwatches existed, so licensing such faces for digital use means negotiating with a copyright owner that may not understand the issues involved in digital licenses. Worse, the App Store supports dozens of countries, and the copyright owner could be different in each country. It’s a legal nightmare.

Apple is all too familiar with watch face copyrights. Years before the Apple Watch existed, the company had to pay the Swiss Federal Railway service $21 million for a license after “adapting” its iconic Mondaine watch face for iOS 6.

Apple could require the developer to certify that they had a legal right to sell each watch face. But the company has no easy way to verify that the developer is telling the truth, and Apple would inevitably be named in any copyright infringement lawsuit because Apple has deep pockets.

When Apple originally started the iTunes Music Store, it took a small army of lawyers to acquire the legal rights to sell all those songs, in all the countries in which Apple operated. One reason it took so long for Apple Music to offer song lyrics is that written lyrics are licensed separately from the music.

Complications to the Rescue?

Apple thinks it has a feature that will satisfy users’ desire to customize their watch faces: third-party complications. The term complicationcomes from the world of mechanical watches, where it refers to extra information that’s displayed in addition to the time. Common mechanical watch complications include the date, the day of the week, and the time in another time zone.

What complications don’t show is the time—that’s reserved for the watch face proper. A popular Apple Watch complication is the weather, showing the temperature and a small icon for the current conditions.

Complications are part of an app, but they have special restrictions. The complication’s code gathers data, like the weather prediction for the day, and passes it to watchOS in a static data structure with details about when to display each data record. watchOS displays one data record at a time, updating the display over time until it’s time for the complication to load more data. The system is ideal for predictable, slowly changing data, like weather, ocean tides, or the phase of the moon. It doesn’t work well for data that needs to be frequently refreshed, such as stock prices.

Apple designed third-party complications this way to save battery life. The complication’s code only runs for a few seconds, several times an hour, which prevents it from sucking too much power. Most of the time, watchOS is just showing the complication using static data. That usually works well, but it does limit what can be represented well in a complication.

With watchOS 7, you can see just how much Apple wants to answer the desire for third-party watch faces without actually going that far. Changes include multiple complications from the same app, watch face sharing, and quite a few new faces. 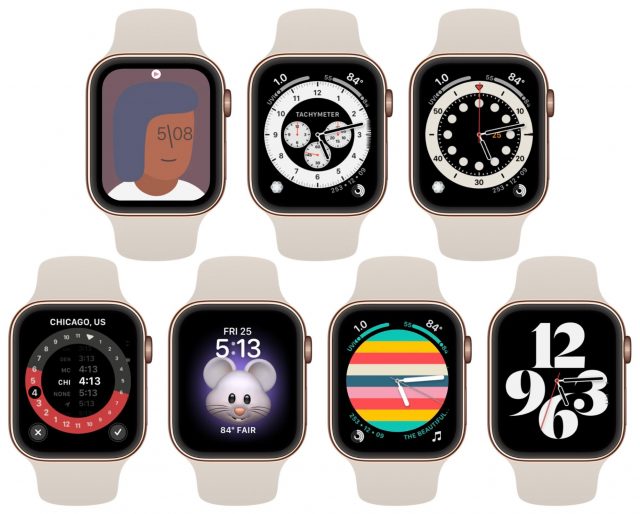 These new features let users make their watches more personal than ever before. I’m sure Apple has additional customization options planned for future versions of watchOS as well. But third-party watch faces are probably not on the horizon.