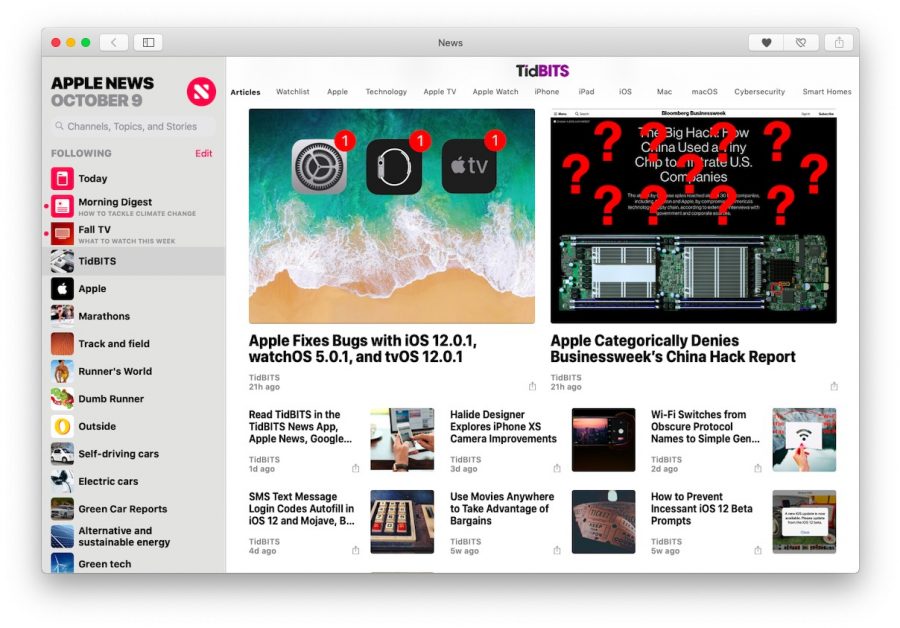 Every time I’ve written about Apple News recently, I’ve received comments from readers outside of the US, UK, and Australia expressing annoyance that Apple restricts Apple News to just those three English-speaking countries. Even Canada is left out!

Why should this be? Part of the problem could be technical—Apple News does a lot of text parsing to recommend articles, and it would be understandable if that was currently too difficult for Apple to expand beyond English. But again, why not Canada? Could the issue be wound up in French language requirements in Quebec?

The point is now partially moot for anyone running macOS 10.14 Mojave because there’s an easy workaround for people in unsupported countries—kudos to TidBITS reader fahirsch for alerting me to this trick. Regardless of where you live, 30 seconds of work will let you run the News app and read TidBITS and many other news sources, albeit only in English.

Unfortunately, several international readers say that the News app won’t allow them to access Apple’s special channels or certain other publications. I suspect that News is using IP address sniffing or another method of geolocation since I haven’t experienced any restrictions while using it in the US while the region is set to Canada. It would be interesting to see if using a VPN to acquire a US-based IP address made a difference.

It turns out that News.app exists in all versions of Mojave; it’s just invisible if your region isn’t set to United States, United Kingdom, or Australia in System Preferences > Language & Region. If you change your region to one of those countries, the News app appears in the Applications folder and you can launch and use it normally. That works in iOS as well; just change the region in Settings > General > Language & Region and you’ll be able to use News there too. Unfortunately, setting a different region may have a variety of undesirable side effects.

Here’s where Mojave has one up on iOS. Once the News app is active, if you move it in your Dock so it takes over a permanent spot (or Control-click it and choose Options > Keep in Dock), you can change the region back to your original country, and you’ll still be able to launch the News app from the Dock and use it. I tried simulating this approach with the Shortcuts app in iOS 12, but the shortcut I created to launch the News app there worked only as long as the region was set to a supported country.

For some people, changing regions causes the News app to disappear from the Dock. However, you can instead launch News with a simple Terminal command without changing regions:

If you don’t want to keep the News app in your Dock or keep returning to Terminal, you could build that command into a Keyboard Maestro macro or an AppleScript. Or, in another simple bit of Terminal hackery, here’s how to make a symlink that gives you a News icon in the Finder:

You can name the symlink however you want and you can locate it wherever you like—just change the second pathname inside the quotes.

Needless to say, I can’t test this trick as thoroughly as someone who lives in another country, so let me know in the comments if there are other unexpected downsides to this method of opening Apple News to the rest of the world.