Need a New Mac, iPad, or Apple Watch? You May Have to Wait

If you’re looking to buy a new Mac, iPad, or iPhone soon, be prepared to set aside past assumptions about near-instant gratification. Amazon’s inability to honor its 1- or 2-day Prime shipping is well known at this point (see “Gearing Up During the Coronavirus Pandemic,” 25 March 2020), but even though it can presumably redirect stock away from its mostly closed retail stores, Apple is having trouble filling orders for many products quickly as well.

The explanation is likely twofold. The global COVID-19 pandemic has caused slowdowns in manufacturing and shipping, making it difficult for Apple to load the sales pipeline to the extent that it normally does. Plus, as it becomes clear that working and studying from home may continue for quite some time, demand for some products has spiked. Even the tech giants are affected:  Google, which makes heavy use of Macs internally, is having a hard time procuring laptops for new employees.

If you were to order a new Mac directly from Apple today, here’s when you could expect to receive it:

Interestingly, the longest delay is for the 27-inch iMac. Our theory behind this is that it’s an ideal machine for Mac users who are suddenly working from home. The screen is amazing, performance is good, and it’s a good value for the money. That’s why it’s our preferred work Mac here at TidBITS. Another possibility is that Apple is planning an update and trying to finesse the manufacturing pipeline to avoid ending up with a surplus of the current model.

Macs aren’t the only Apple products suffering from shipping delays. Here’s what the shipping dates look like for iPads and their accessories:

In terms of iPhones, the iPhone 11, iPhone 11 Pro, and iPhone 11 Pro Max are in stock and will arrive in a few days. However, if you were to order a new iPhone SE today, it wouldn’t arrive until late May or early June.

Most other Apple products are unaffected. You could get AirPods, AirPods Pro, or a HomePod in just a few days, and the same is true of the Apple TV HD, Apple TV 4K, and the iPod touch. On the downside, if you want an Apple Watch Series 5, you’re again looking at delays until early to mid June.

Generally speaking, apart from the 27-inch iMac and the Apple Watch Series 5, the products that will take longer to get are those that are both new and popular.

If you’re an individual user, there’s no need to worry. Shipping delays are a slight inconvenience and are perfectly understandable in these trying times. Just be patient and remember that times are tough all over. But if you’re running a business, especially one that needs to equip employees working from home, it’s more stressful.

Adding to the headache is the fact that most Apple retail stores remain closed, which makes it impossible to, for instance, compare a Smart Keyboard Folio to the new Magic Keyboard for the iPad Pro. Apple has reopened some locations (see “Apple Announces Plans to Reopen Retail Stores,” 18 May 2020), and Michael Steeber of 9to5Mac is maintaining a map that tracks closed and reopening Apple Stores.

For those who need a new Apple device in a hurry, look to other electronics retailers. For instance, Best Buy and B&H Photo still have some configurations of the 27-inch iMac in stock, as does our old friend Small Dog Electronics. Plus, many parts of the United States still support independent Apple resellers that may be open for curbside pickup—Apple maintains a locator so you can see which stores are near you. Look for the Premier tag indicating an Apple Premier Partner since most of the stores will be cellular carriers selling only iPhones. 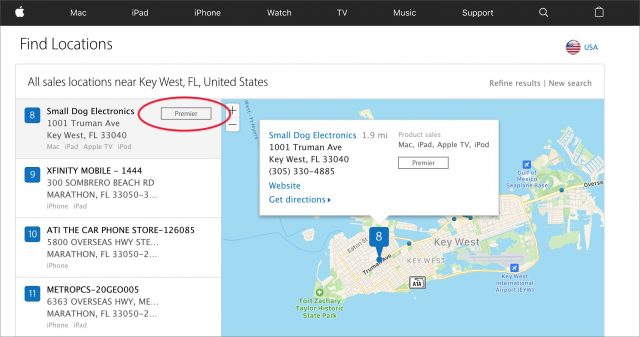 In a time when the entire planet is facing all manner of problems, a brief delay on shipping Apple products is far from the worst, but it may require readjusting your expectations.