The Few Remaining Uses of the Word “Macintosh”

A quick quiz—just answer quickly, without thinking about it: Are you a Macintosh user?

I’m not actually interested in what computer you use, but your reaction to the word “Macintosh.” If you didn’t blink at it, you’ve probably been using Macs for over two decades, whereas if it sounds funny, or even entirely foreign, your experience with Macs is probably shorter. Or you respond well to branding changes.

Some weeks ago, I was struck by the thought that Apple had almost entirely managed to scrub its corporate communications of the word “Macintosh.” It’s not surprising, of course, but I was curious if the company had slipped up anywhere. To find out, I put together a complex Google search that focused on just Apple sites, eliminating those which host third-party content like discussions.apple.com. It also eliminates pages pointing at technical specifications for old products, a page listing obsolete products, and a spurious link to the Wikipedia page on HyperCard that somehow got an apple.com URL.

My search confirmed my initial hunch about one remaining use of the word “Macintosh” by today’s Apple: the default “Macintosh HD” name of the internal drive on a new Mac. 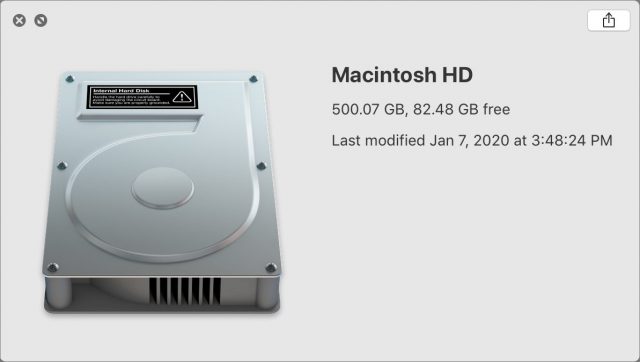 I had thought that was it, but after I published this article, eagle-eyed readers clued me in to three additional uses:

Is Your Drive Named Macintosh HD?

Many Mac users personalize that name immediately, although less experienced Mac users often don’t realize they’re allowed to change it. (If you’ve never done it, just click the name once to select it and a second time to start editing it, just like a file or folder.)

Of course, in macOS 10.15 Catalina, with its bifurcated system approach, you actually have two volumes: Macintosh HD and Macintosh HD – Data, the latter of which holds your files. Oddly, our friend Jeff Carlson reports that if you start with a new Mac and rename its internal drive in the Finder, the APFS data portion of the drive will still be called Macintosh HD – Data in Disk Utility. He had no trouble renaming it to match in Disk Utility (again, just click the name and type a new one), and he has experienced no subsequent problems.

What’s most curious about this vestigial naming is that everything about it is wrong. Besides the anachronistic use of “Macintosh,” the “HD” abbreviation for “hard disk” or “hard drive” refers to a spinning disk drive, whereas most Macs rely on SSDs (solid-state drives). Even the case-less hard drive icon in the Quick Look preview window incorrectly uses an image of a spinning disk to represent an SSD.

(Yes, you can buy the 21.5-inch iMac with a 1 TB hard drive, but you shouldn’t—the performance was poor before APFS and will likely be worse with APFS in Catalina. I don’t recommend the Fusion Drive either; a straight SSD provides better performance, and you can add an external drive for more storage if necessary. The Mac’s current file system, APFS, was designed with flash storage in mind—see “What APFS Does for You, and What You Can Do with APFS,” 23 July 2018.)

So what should Apple do? Customized icons for different types of drives would be a good start. Time Machine drives get custom icons automatically, as do many other types of storage devices that were more common in the past, so surely Apple could design different icons for SSDs and Fusion Drives, and then display them appropriately based on the type of drive.

As far as the name goes, Apple could customize the name too, as in “Mac SSD” or “Mac Fusion Drive,” but Macs (apart from the 2019 Mac Pro) don’t have standalone SSDs inside; instead the company usually solders flash memory chips onto the motherboard. A more appropriate name would be “Mac Drive.” Or Apple could follow the APFS under-the-hood change and focus on what’s on the drive by calling it “Mac Data.”

To paraphrase the bard, “O Macintosh HD, Macintosh HD! Wherefore art thou Macintosh HD?” Or just dodge the question and rename your drive to something with personal meaning.