Why Is the Apple TV Constantly Advertising at Us?

The Apple TV app on the Apple TV is currently the bane of my existence. In theory, it should be a tidy way to manage everything you watch, bringing together content from Apple, Disney+, HBO, Hulu, and other streaming services (but still not Netflix, for some reason), plus live news and even sports. It sort of does that, but over time, Apple has started using the app to push the company’s own paid content, especially its Apple TV+ service. Open the Apple TV app and it inundates you with ads for Apple TV+ and its shows. Frankly, this bugs the heck out of me, especially since many of the ads are inappropriate for my kid to see. Before I succumb to the need to rant, here’s a tweak to make the Apple TV app a little more tolerable.

If you use a fourth-generation Apple TV HD or Apple TV 4K, you’re probably familiar with the Top Shelf feature, even if you didn’t know what it was called. Top Shelf is what appears at the top of the screen when you select one of the icons in the top row of the tvOS Home screen. It’s usually a promotion for whatever the selected app offers.

Prior to tvOS 13, if you placed the Apple TV app in the top row and selected it, it would display items from your Up Next queue, and you could swipe up and then left or right to select one and play it directly from the Home screen. Useful! But in tvOS 13, the default is to display autoplay videos of whatever Apple feels like promoting. Not useful! (See “#DeathToAutoPlay—No More Audio and Video That Plays Automatically!,” 6 February 2019.)

Apple may be pushing its own service and shows in the Apple TV’s Top Shelf preview area, but at least the company has given us an out. Simply go to Settings > Apps > TV and select Top Shelf to switch it from What to Watch to Up Next. Seeing your Up Next queue in the Top Shelf area is much more useful since it lets you quickly pick up where you left off watching something.

I roasted Amazon for this sort of pushy commercial behavior back when I reviewed the original Fire TV in “Fire Watch with Me: Amazon Fire TV vs. Apple TV” (13 May 2014):

While Movies, TV Shows, and Music are fixed icons that you can’t ignore on the Apple TV, Amazon takes the Fire TV’s interface to a whole new level of “Buy from me!” You literally cannot get to Netflix, Hulu, or any games without crossing the Amazon river of content, though there is a Recent section under Home that shows recently opened apps and videos. The Fire TV makes no bones about being a vehicle to push Amazon’s digital content.

With the Apple TV app, Apple has copied Amazon’s strategy almost verbatim. Besides the somewhat-useful Up Next feature, almost everything on the home screen of the Apple TV app is geared toward getting you to give more money to Apple. Since I’m spending a bunch of time with the Apple TV while updating Take Control of Apple TV, I have some thoughts about all of this.

Just under Up Next (which lists things I actually watch or may want to watch) is a section called What to Watch. Listed there—at least for me—are The Bachelor (never seen it, couldn’t care less), The Mandalorian(already finished it), Ellen’s Game of Games (couldn’t care less), and so on. Each of these items is either trying to get me to watch content in which I have zero interest or re-watch something I’ve seen before. There’s no way to customize this list so that it’s helpful to me. Why isn’t the Apple TV app working for me, rather than for Apple?

Even more annoying is that the Apple TV app regularly advertises content that is wildly inappropriate for my children. I realize that statement risks branding me as a prude, but the app is supposed to be the primary interface for content on the Apple TV and should be appropriate for all ages.

For instance, just below What to Watch is a banner for Apple TV+ that advertises children’s shows like Helpsters and Snoopy in Spacealongside the Jason Mamoa vehicle See, a show so pornographic that it even leaves hard-nosed critics baffled. (You may not want to click that link at work.)

I’m not here to play Church Lady; I’m just saying I’d like some control over what the Apple TV app shows. For instance, to get to the news section of the Apple TV app, I had to scroll through ads for:

Joker might be the most egregious, since you have to pass somewhat disturbing still images of Joaquin Phoenix turning himself into the Joker. In an odd nod to parentally prudish types such as myself, Apple edited the cigarette out of his hand, which may bother me even more. Why not just pick a different scene or just not show stills from the movie? Jokermade over a billion dollars on a $50 million budget and was one of the most talked-about films of 2019. I don’t think it needs such a heavy-handed promotion.

Again, I’m not here to knock the Joker movie (my wife and I enjoyed it) or your taste in entertainment. I’d like to either be able to hide explicit content in the Apple TV app or at least have the option to move things like News above all the ads. If you live in a childless household, you’ll get pretty tired of having to scroll through ads for Little Baby Bum to get to HBO.

Even if you don’t have kids and don’t object to adult content, being able to rearrange things in the Apple TV app would make it easier to navigate. For instance, scrolling down the Watch Now screen, I come across three rows highlighting content from five seemingly random services: Apple TV+, Disney+, HBO GO, STARZ, and PBS Video. I have subscribed to all of them at some point, but I’m currently interested in only Disney+. Why can’t we move the services we want near the top of the screen and hide the others?

Apple gives you a small amount of control over only one section in the entire Apple TV app. That’s Up Next, which keeps track of shows and movies to finish and recently purchased items. You can press and hold a title in Up Next to see options to remove it from your queue. 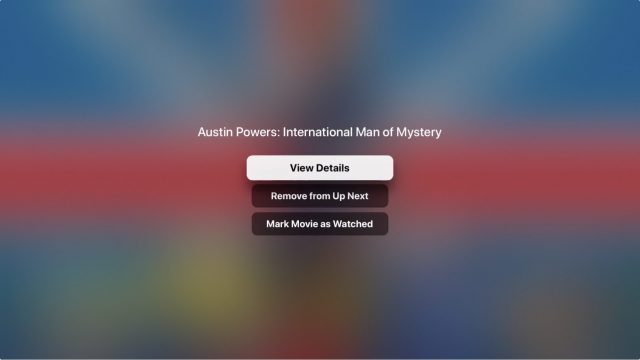 And if I set restrictions for movies and TV shows in Settings > General > Restrictions, Up Next stops suggesting the content that I’ve restricted. So if your rating limit is PG-13, R-rated movies don’t show up in your Up Next queue. Up Next is the only part of the Apple TV app that caters to your interests. But with tvOS 13 and Up Next being removed from Top Shelf by default, Apple seems to be trying to wriggle even that level of control away from us.

It’s unfortunate, though, that Apple hasn’t designed the Apple TV app to be actively helpful to the user. Instead, Apple has decided to make it a promotional vehicle to shove the content the company wants you to watch down your throat. There are third-party alternatives—see “Avoid Netflix AutoPlay Previews on the Apple TV with Reelgood and WatchAid” (9 August 2019)—but it’s a shame we have to look elsewhere for apps that are working for us.

After all, an Apple TV costs between $149 and $199. At that price—much higher than most of the competition—is it too much to ask that we not be inundated with advertising? Anyone who spends that much on an Apple TV will probably be interested in Apple TV+ without an overbearing sales pitch, and turning such an expensive device into a billboard makes it feel cheap, like a Fire TV. Apple has always prided itself on its good taste, and turning the Apple TV’s front end into an ad platform is anything but.