Your Mac Can No Longer Listen for Aliens, but It Could Help Cure COVID-19

The volunteer portion of SETI@home is going into hibernation. SETI@home was the world’s first major distributed computing project, which let anyone with spare CPU cycles help the Berkeley Search for Extraterrestrial Intelligence Research Center look for signs of communication signals from space. The project launched almost 21 years ago (see “SETI Brings Space Exploration to Home Macs,” 24 May 1999), and it was a big deal on the Internet for a long time, with many online communities forming teams that competed to generate the most work credits. TidBITS has had a SETI@home team since the launch of the Mac client, with over 303 million credits generated, putting it in the top 5% of teams. It still has 23 active members, most notably Bob Lauterbach, who contributed over 103 million of those credits!

SETI@home is going into hibernation because it has all the data it needs. The project’s astronomers said that they’re at the point of diminishing returns with getting more data, so now it’s time for back-end analysis of the results, which they’ll write up in a scientific paper. By all counts, SETI@home has been a rousing success, whether or not it discovers communications signals from space.

If you’re looking for a new distributed computing project to join (calling Bob Lauterbach), the 20-year-old Folding@home project is still going strong. Folding@home is dedicated to “understanding protein folding, the diseases that result from protein misfolding and aggregation, and novel computational ways to develop new drugs in general.”

In addition to cancer, Alzheimer’s, Huntington’s, and Parkinson’s, Folding@home is tackling a disease that has been dominating the headlines: COVID-19. Your contributions could help researchers find a treatment. It’s easy to get started with Folding@home:

You’ll be presented with a warning—it could take a while—that the client has not been assigned an identity. You can click Fold Anonymously to get started quickly, or if you’d like to get credit for your Mac’s CPU cycles, click Configure Identify and enter a username. You can join the TidBITS team by entering 236284 as the team number. 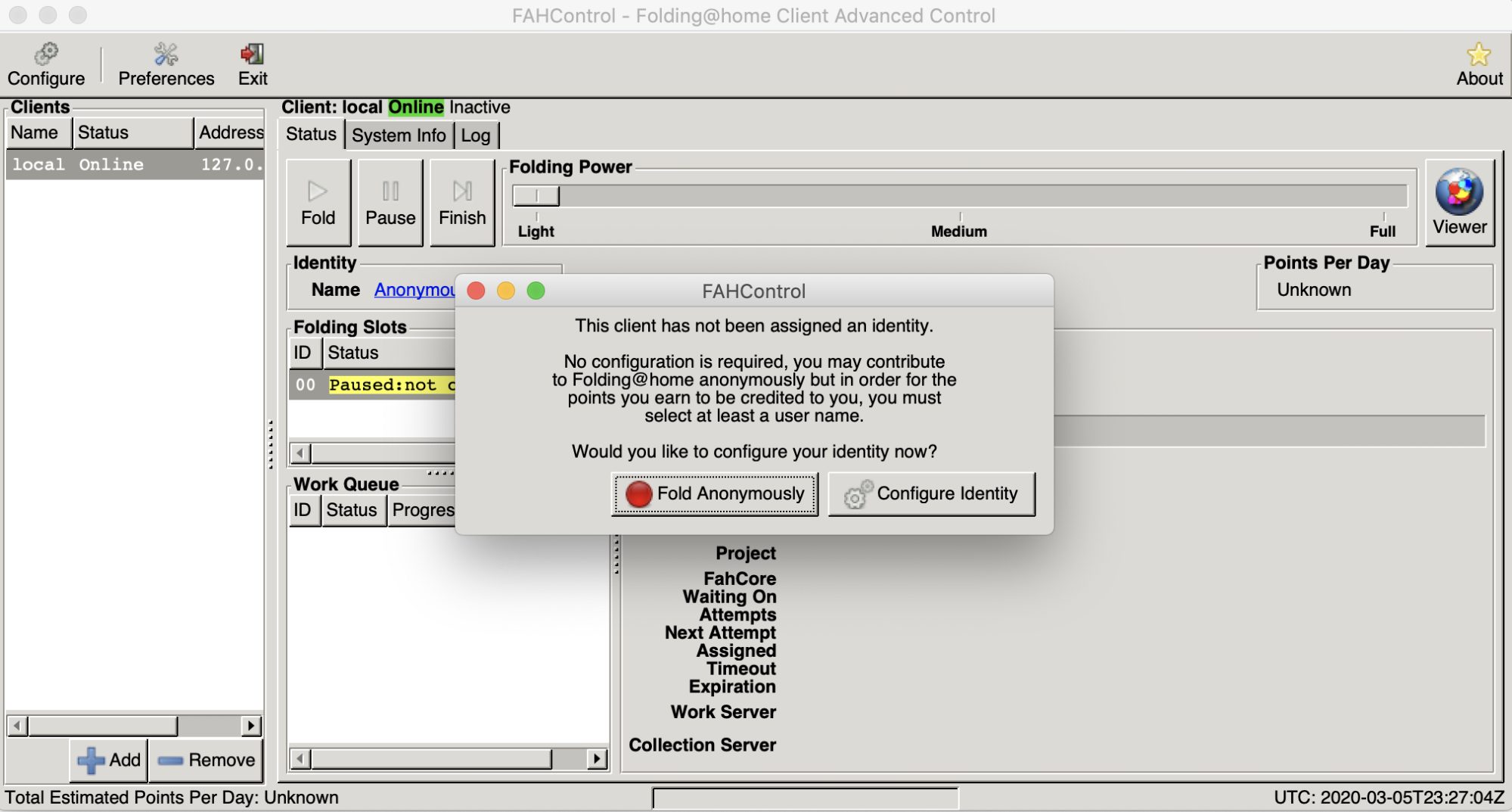 Since Folding@home consumes a lot of CPU cycles, the client pauses by default if your Mac laptop is running on battery power. You can toggle that setting in Configure > Advanced > Power.

Curious about what your Mac is doing? Click the Viewer button to open FAHViewer and get a sweet 1990s-style rendition of the molecules you’re working on. 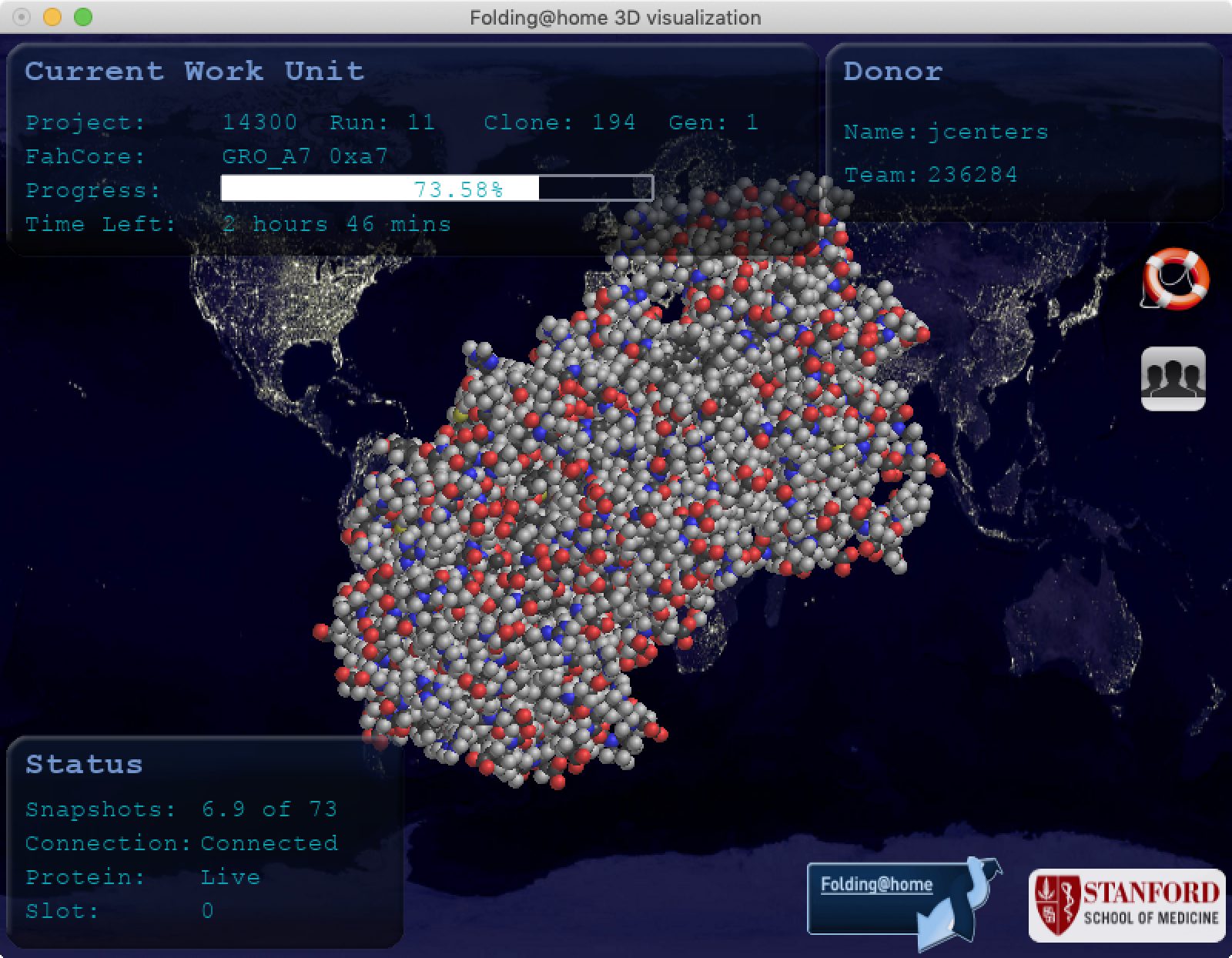 For an interface that’s easier on the eyes, access the Web client at https://client.foldingathome.org/. As long as the “I support research fighting” setting is set to Any Disease, it will work on COVID-19 calculations. 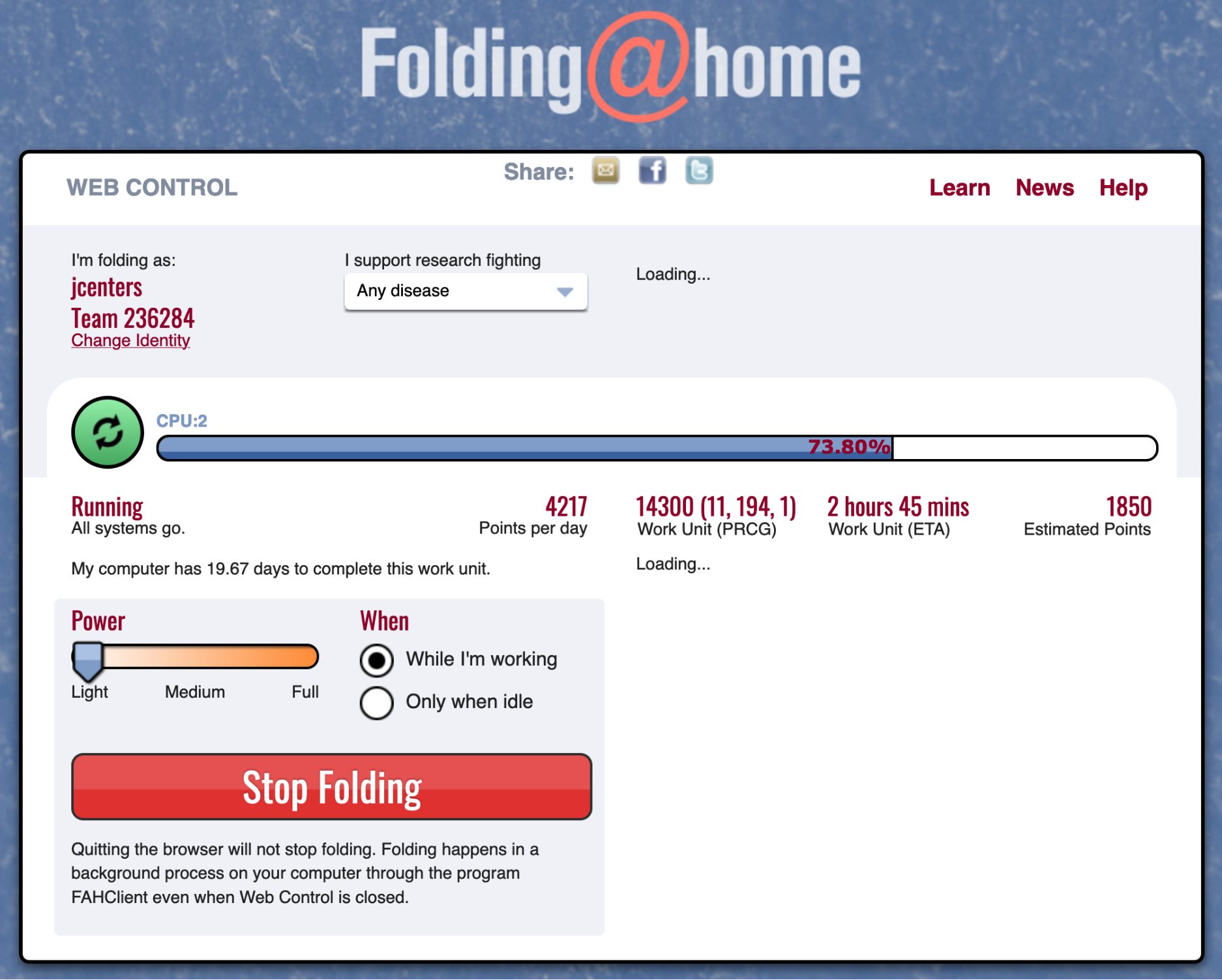 Who knows, maybe your Mac could be the key to stopping COVID-19?