Rumors of a radically redesigned Apple Watch with flatter edges mimicking the iPhone design language did not come to pass. The Apple Watch Series 7 that Apple unveiled during its “California Streaming” event looks much like its predecessors, with modest upgrades compared to blockbuster Apple Watch unveilings of yore. 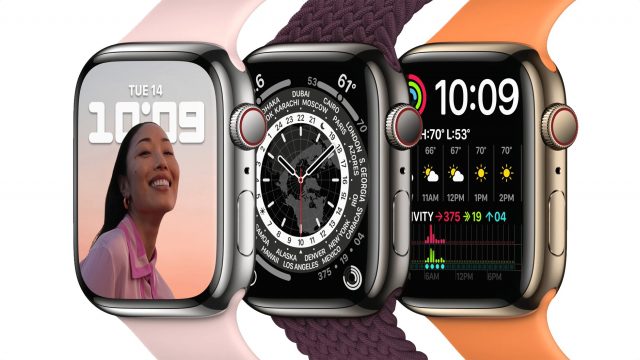 If you squint, though, you’ll see much that is new.

Apple has fiddled with the watch’s dimensions. The Apple Watch Series 7 boasts 20% more screen area than the previous generation and 50% more than the Series 3. The display’s borders have been reduced to 1.7 mm, a 40% difference compared to Series 6, “while barely expanding the dimensions of the watch itself,” according to Apple. Note that the Apple Watch Series 7 will come in 41 mm and 45 mm sizes, replacing the 40 mm and 44 mm Series 6 models. They remain compatible with existing bands.

The case and display have softer, more rounded corners, and they merge more seamlessly than they do on earlier models. A new “refractive edge” on the display means full-screen apps and faces appear to conform to the case curvature.

The always-on screen is 70% brighter indoors when your wrist is down, “making it even easier to discreetly check the time,” Apple quips.

Apple tweaked the watchOS interface with the Apple Watch Series 7’s larger size in mind. The company redesigned and enlarged buttons in apps like Activity, Alarms, Calculator, and Stopwatch to make them easier to tap on the expanded display. About 50% more text (such as messages or emails) fits on the screen now, with less scrolling. 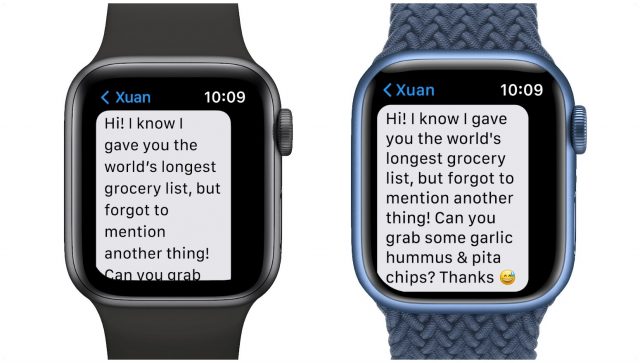 watchOS 8 on the Apple Watch Series 7 adds a full keyboard that lets you enter text either by tapping or by sliding your fingertip from character to character in a manner that has long been common on smartphone keyboards. Apple’s version of this system, dubbed QuickPath, taps into machine learning to predict the words you’re trying to enter. The Scribble text-input method is easier to use on the larger screen, too. 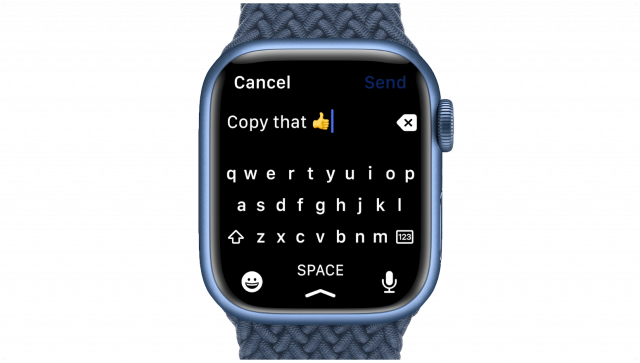 Durability gets a boost. Apple claims that the display is more crack-resistant due to a new “geometry.” The Apple Watch Series 7 is also the first model to provide IP6X dust resistance along with the usual swimmer-friendly waterproofing. 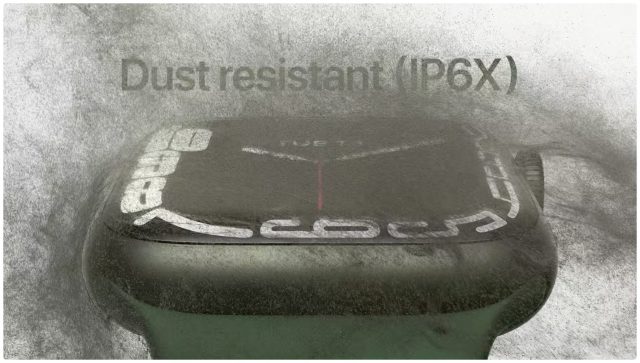 Charging for the Apple Watch Series 7 is up to 33% faster than the Series 6. With a new charging architecture and a USB-C puck, achieving an 80% charge takes only about 45 minutes. If you like to wear your watch to bed instead of leaving it to charge overnight, 8 minutes of pre-snooze charging is enough for 8 hours of sleep tracking.

The Apple Watch Series 7 debut was humdrum in that Apple didn’t trot out any new physical health sensors. On the software side, though, watchOS 8 brings new health features to both the Series 7 and other models.

Happily for those of us who bike a lot, Apple put a lot of emphasis on cycling. watchOS 8 can analyze GPS, heart rate, accelerometer, and gyroscope data to detect when you begin a bike ride, and it prompts you to start an Outdoor Cycle workout if you didn’t initiate one manually. This works on the Apple Watch SE, Series 6, and Series 7.

For those who ride electric bicycles (see “Some Fancy E-Bikes Have Their Own Apps. We Tried Two,” 2 April 2021), the Apple Watch can more accurately measure active calories with an updated workout algorithm that evaluates GPS and heart rate to better gauge when users are pedaling with electrical assistance versus leg power alone.

Apple also improved fall detection. With watchOS 8, fall detection algorithms better detect falls during workouts—including cycling—and have been tuned to recognize the unique motion and impact of falls during a bicycle ride and other exercise types. As with general fall detection, the watch can call emergency services if the user is incapacitated.

For all kinds of athletes, new voice feedback through the watch’s built-in speaker, or through AirPods or other Bluetooth earbuds, announces milestones and activity ring status, helping users stay focused during workouts.

There are (natch) new watch faces. A dynamic Contour face animates when the wrist is raised, smooshing the dial out, cartoon-like, to the screen’s edge. And a new Modular Duo face exploits the watch’s expanded dimensions with two extra-large, data-rich complications. 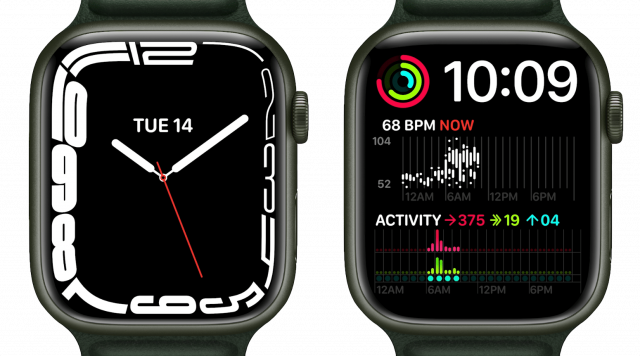 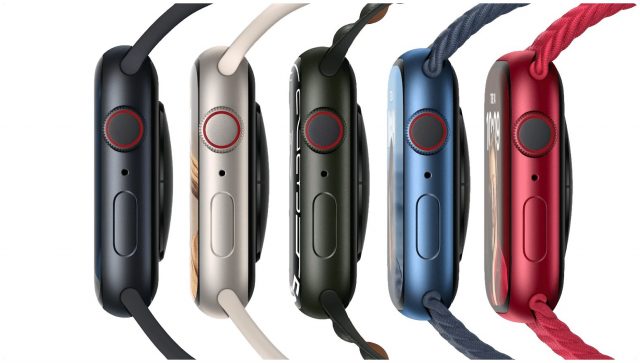 Fans of Nike and Hermès Apple Watch variants get fancy new watchbands, as per usual. But if you want to keep using your existing bands, rest assured they’ll still work. Apple is offering fresh new colors across its band catalog, too. 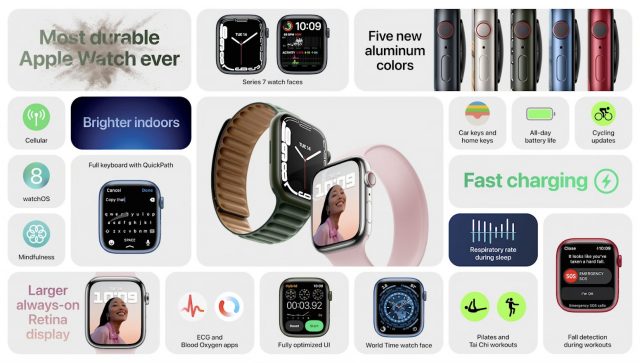 Those who are happy with an Apple Watch Series 6 likely won’t feel a compulsion to get a Series 7. Although there are new features, they’re incremental for the most part.