Privacy ranked highly among the messages underlying Apple’s Worldwide Developer Conference keynote, meriting top-level billing from software chief Craig Federighi. Apple doubled down on previous efforts to ensure your personal, financial, and confidential information would remain private. The company also extended its offerings to block tracking in email, offer more anonymous Web browsing, and push back even harder against advertisers, marketers, and others trying to track your behavior without your knowledge or permission. 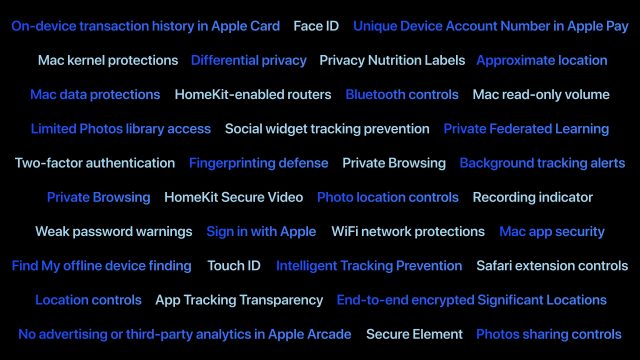 With iOS 15, iPadOS 15, and macOS 12 Monterey, Apple has further limited tracking data fed to third parties within Safari and added a blocking mechanism for invisible tracking images embedded in email messages. With iCloud+, the new name for the paid tiers of the iCloud service, you can also send email from anonymous addresses managed by Apple’s servers and use a proxy service for Safari that defeats tracking through a combination of encryption and redirection.

Conceptually, anonymity, privacy, and security have a complicated relationship:

Apple has striven for several years to ratchet up its protection of personal data across all its platforms, particularly in Safari. While some advertising systems respect our requests, settings, and technological measures to prevent tracking and observation, other ad tech plays a ceaseless game of cat and mouse with Apple, bypassing the company’s protections and causing Apple to expand those protections repeatedly. Ad tech firms aggressively engage in this antisocial behavior to assemble and sell electronic dossiers of marketing information and for targeted advertising, which can be sold at higher prices than more general ads.

This constant pressure to subvert user intentions led to the death of the Do Not Track consensual setting. It also pushed Apple into making roughly annual changes to Safari that limit what information a third party (an ad network or other tracking company) can deduce or extract by having its code, cookies, or embedded media on a website displaying an ad or by trying to obtain visitor statistics. (Confusingly, and perhaps for historical reasons, the website is considered the first party and you the second party in that interaction.)

The specifics added in the operating system updates slated for the third quarter of 2021 tie up many loose ends. But they also blur the lines between anonymity and privacy. As TidBITS writer and security expert Rich Mogull of Securosis said, “Due to the insane intrusiveness of online tracking, the only way to maintain privacy is to use anonymity. It’s the advertisers and their supporting infrastructure that have forced this. They took away choice, so the only response is anonymity.”

Here’s the rundown of what you can expect to see later this year:

Apple didn’t decide to develop these additional privacy protections and anonymity enhancements in a void. They stem from a desire to protect users against unceasing attempts to monetize your every moment online by firms ranging from Facebook, one of the world’s largest corporations, to shadowy ad-tech shops.

By adding both free and paid features—iCloud+ starts at $0.99 per month for 50 GB of storage and other benefits—Apple ups the pressure on companies like Amazon, Google, and Microsoft to step up their privacy protections, too. Because Apple continues to focus on services as a pathway to maintaining its high margins and increasing its revenue outside of the vagaries of hardware sales, these privacy-first moves may also attract customers who make purchases on Apple platforms rather than others. It’s simultaneously user-friendly and good for Apple’s bottom line, and it forces other companies to try to meet Apple’s bar—or lie about their intentions with regard to your data.