Apple’s AirTag offers compact and inexpensive tracking of your items through low-power, short-range Bluetooth networking signals. It’s a perfect item to drop into your suitcase or other checked bag while traveling during this summer’s explosion of lost luggage.

That way, even if an airline says your bag is lost or they can’t (or refuse to) give you an update on its whereabouts, you can track it! Some travelers have reported that they were able to find their luggage in a mess of thousands of bags in overflowing claim areas, find out that someone had seemingly stolen a bag that was supposed to be delivered, track down a bag delivered to the wrong address, or help police find bags allegedly stolen by an airport worker. One person tracked their “lost” bag to their home address: an airline delivered the bag to their home in California while they were in Glasgow for a wedding, waiting for it to arrive with a custom kilt.

I’ll definitely be planting AirTags in my bags before my next air trip in a couple of months—my first in three years and the first since AirTags were released. But I’ll be aware of some of the ways in which AirTags can provoke annoyances and try to mitigate those. Adam and Tonya Engst recently visited their son in Vancouver, B.C., and experienced a few even though they didn’t check luggage. Some of their issues revolved not around AirTags but other Apple devices, which react similarly when separated from their owners.

The Find My network technology enabled through Apple devices, AirTags, and third-party Find My items like trackers from Chipolo and Pebblebee has three purposes that can result in “correct” but unwanted notifications:

You can improve the behavior of these last two when you intend to leave something behind in a specific place or when you know that a Find My item is near or traveling with you for a good reason.

(For more detailed information about the whole Find My ecosystem, consult my book Take Control of Find My and AirTags.)

Apple originally built Find My around devices: any iPhone, iPad, Mac, or Apple Watch with active Internet access can have its whereabouts tracked. This is informally called Find My Device, and those Apple items are the “devices” in question. The Find My network expanded that functionality for these devices to allow relaying via encrypted Bluetooth broadcasts through other people’s nearby Apple hardware with an Internet connection when your device lacks one. AirTags and other Find My items rely exclusively on this crowdsourced Bluetooth aspect of Find My.

Consequently, you can track both AirTags and any Apple device using the Find My network. The only significant difference between tracking Apple devices and Find My items like AirTags is that device locations can be shared automatically to other members of a Family Sharing group, while Find My items are exclusively reported to the item owner’s iCloud-linked devices. Plus, a native Find My app in iOS, iPadOS, or macOS has to be used to view and manage Find My items.

In the Find My app, you can opt in or out of receiving notifications when you have left a device or item behind. With the feature enabled, you can drill down and add locations where you don’t want to receive an alert if you leave it there—like your home.

Adam noted that when he and Tonya left their AirBnB rental each day, he received an unnecessary notification about leaving his AirPods and MacBook Air behind. That was the correct behavior on Find My’s part, but Apple offers a workaround: he could have added a location exclusion—he didn’t think of using the location exclusion feature for a place other than his house. There’s no harm in adding as many locations as make sense, even if they’re only temporarily relevant. (Apple shows AirPods and supported Beats hardware in the Devices view in Find My, even though they can’t reach the Internet like other Find My trackers.)

In the Find My app in iOS/iPadOS or macOS, enable and refine Notify When Left Behind by following these steps, with very slight differences between the platforms:

You can later remove locations by tapping or clicking the red minus icon and confirming the removal. You can only remove the Home location from the iPhone or iPad with which the Find My item is paired.

Adam also said that Find My warned him several times that he had left his MacBook Air behind while driving out of a rest area even though it had never left the car. My guess is that its last known location was relayed via someone else’s iPhone, which updated at the rest area. As he drove away, the Find My system reported the problem based on the last-known location more quickly than his iPhone checked in again.

Pause AirTag “Moving With You” Notifications

To prevent people from placing AirTags in your belongings or on your vehicles to track you without your knowledge, Apple sends alerts to any nearby iPhones or iPads that are relaying Find My location information for such items when the paired device isn’t nearby.

For instance, my wife rightly distrusts tracking technology but recently asked me for an AirTag that she could pair with her iPhone to place in the car she drives nearly exclusively. She appreciated that such AirTag tracking is limited to her iPhone and intended it only to help her find a car in a parking lot or garage. (We have both parked in too many of the same places in Seattle, and we frequently have to hunt for our vehicle, which is too old to take advantage of how Maps on the iPhone records your parking location.)

However, her use of the AirTag causes a minor issue for me and my older kid. Both of us drive this car from time to time by ourselves. Whenever we do, we receive an AirTag Detected Near You alert on our respective iPhones. That’s good! That’s what it’s designed to do. (You would also receive an alert for other Find My items, such as AirPods, supported Beats headphones and earbuds, and trackers made by third parties, like VanMoof for bikes and Pebblebee for a wallet-size card.)

You can see how this would become even more irritating when far from home and you and the person or people with whom you travel aren’t together at all times. Any bag, keychain, or other gear you might borrow or lend that isn’t near the iPhone with which it’s paired will trigger a “moving with you” warning!

This warning would also appear if the Find My item’s owner had turned off Bluetooth. They might have flipped the Bluetooth switch off, powered down their phone, or enabled Airplane mode and disabled Bluetooth. Without the AirTag or other item phoning home to its paired device, the Apple ecosystem deduces that it’s “away” from its owner and thus is moving with you. Jeremy Roussak posted a story about this on TidBITS Talk; he was getting alerts from an AirTag owned by someone else in his travel group who, it turned out, had turned off Bluetooth.

However, Apple offers a way to help here, whether at home or elsewhere: under Pause Safety Alerts, you can tap Pause for Today, which prevents new alerts until the next morning. If you’re in a Family Sharing group, you should also have the option to tap Pause Indefinitely. However, despite being in such a group, we never receive that option. Other people have had similar experiences, too— Pause Indefinitely appears for some and not for others, with no apparent reason why. 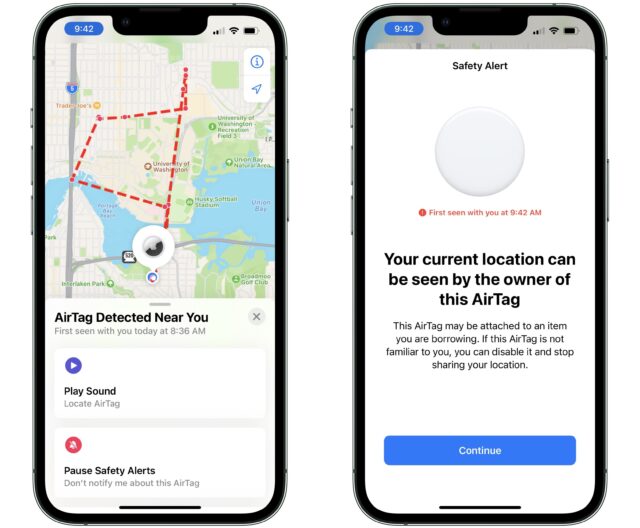 Avoid Bleeping for an AirTag Left Behind

A second anti-stalking mechanism could wake you up in the middle of the night in an unfamiliar hotel room if the item if someone moves the item or surprise you when you move a bag without knowing it has a Find My item inside. An AirTag or third-party Find My item will play a loud beeping sound after it has been separated from its paired device for a random interval between 8 and 24 hours the next time it’s moved.

Depending on the device, the sound can be quite loud when unmuffled, in the range of a dishwasher to an air horn. Of course, the sound will be substantially reduced inside a bag, pocket, vehicle, or the like. It doesn’t pay attention to the time of day, making it sound whenever its random timer goes off. (The interval is random to prevent stalkers from being able to manage the process by, say, coming near you every X hours. Apple initially set the interval to 24 hours but later reduced and randomized it to foil stalkers. It only triggers when moved to avoid excessive alerts for items that are static and not intentionally tracking someone without their knowledge.)

In a nefarious scenario—akin to those spelled out in “13 AirTag Tracking Scenarios” (15 May 2021)—an AirTag surreptitiously planted in your bag or car would be discovered when it started beeping at random intervals the next time you moved it. If you hear such a sound and don’t immediately know whose AirTag is making the noise, open Find My on an iPhone or iPad, tap the Items button, tap Identify Found Item, and see what appears.

However, the alarm might occur for perfectly innocent reasons, such as when someone you’re traveling with has left an item behind and been gone more than 8 hours, as can happen on trips, and you or someone else shifts the thing that contains the tag. Or, if the owner’s paired device has, as described earlier, Bluetooth disabled or is powered down for an extended period, the same could happen when the tracker is moved.

To avoid this problem, chat about AirTags and similar trackers with anyone with whom you’re exchanging stuff. They could let you know which items contain trackers, so you put them somewhere they won’t be disturbed. Or they could take the tracker with them or disable it by removing its battery, possible with an AirTag and Chipolo ONE Spot, but not with most third-party Find My items. (Note that you can’t use Identify Found Items for testing while the person and their iPhone are nearby because found items only include Find My items that aren’t near their paired device.) Also, make sure that people using tags don’t turn off Bluetooth or disable Bluetooth as part of Airplane mode without informing those around them!

I plan to be away from home for a few weeks later this year—and I had better disable, unpair, or careful stow all my AirTags and Apple devices I leave behind, or my family might be happier to see my AirTag-paired iPhone than me when I return home.