Apple walks a fine line with the iPhone. On the one hand, it’s magic made manifest, giving you access to both the accumulated knowledge of the world and all the people you can juggle. On the other, the combination of Apple’s elegant hardware and the psychologically manipulative efforts of untold numbers of apps and services make the iPhone the ultimate distraction device, bordering on an addiction. For many, what happens on the iPhone is more compelling than nearly anything in real life. It’s the digital equivalent of crack cocaine rolled in Doritos coating, glammed up in the latest fashions. (The same applies, more or less, to all smartphones—I’m not actually singling out Apple here; I just don’t pay attention to Android smartphones.)

Of course, Apple is entirely aware of this tension. The company makes billions and billions from those who want their digital dopamine hits while proclaiming their fashion sense and deepening their tribal affiliation. But despite what detractors say, Apple isn’t a soulless moneymaking machine—if Facebook controlled the iPhone, we’d all be drooling zombies by now, incessantly pressing on the phone’s prominent Like button. Apple offers several solutions beyond the protections afforded by its flawed and controversial App Store approval process. First, the Screen Time technology lets us set limits to help corral our electronic urges. Second, Do Not Disturb gives us a chance to focus on the real world around us without fear of being sucked back in by the next notification. And Apple just introduced a way of gathering less-important notifications into scheduled groups—see “Reduce Distractions with Notification Summaries” (20 December 2021). We can argue about how effective these features are, but at least they’re present for those who have trouble being their best selves in the face of compelling digital distractions.

The product of 2021’s rethink is Focus, which subsumes all three of those features, suggests other scenarios, and lets users customize precisely which people and apps can break through your virtual cone of silence. Plus, Focus works on (and optionally syncs between) your iPhone, iPad, and Mac (running macOS 12 Monterey).

In essence, Focus abstracts and extends the core functionality of Do Not Disturb, automatically blocking calls and notifications at certain times, at particular locations, or when you’re using certain apps. The idea is that you’ll be able to avoid interruptions during activities like working out, doing homework, eating dinner, or gaming. But not all interruptions—you can allow certain people and apps to break through. A Focus can also hide or show certain Home screen pages, prevent notifications from appearing on the Lock screen, and more.

To ensure that no one loses familiar capabilities, in Settings > Focus, Apple provides pre-built Focuses for Do Not Disturb, Driving, and Sleep to match the old Do Not Disturb options:

(Those three are on the iPhone, which seems to be the focus of Focus. The iPad and Mac lack Sleep and can’t activate Driving automatically. On the Mac, look for Focus settings in System Preferences > Notifications & Focus > Focus.)

If you can’t immediately think of how you would use Focus beyond these options, you’re not alone. As a result, Apple makes six suggestions: Personal and Work (in the main list) and Fitness, Gaming, Mindfulness, and Reading (when you add a new Focus). You can also create a custom Focus from scratch. Three of these suggestions are special: Fitness, Gaming, and Mindfulness can turn on automatically: when you’re engaged in a workout, when you connect a wireless controller, and when you’re in a Mindfulness session started from your Apple Watch, respectively. 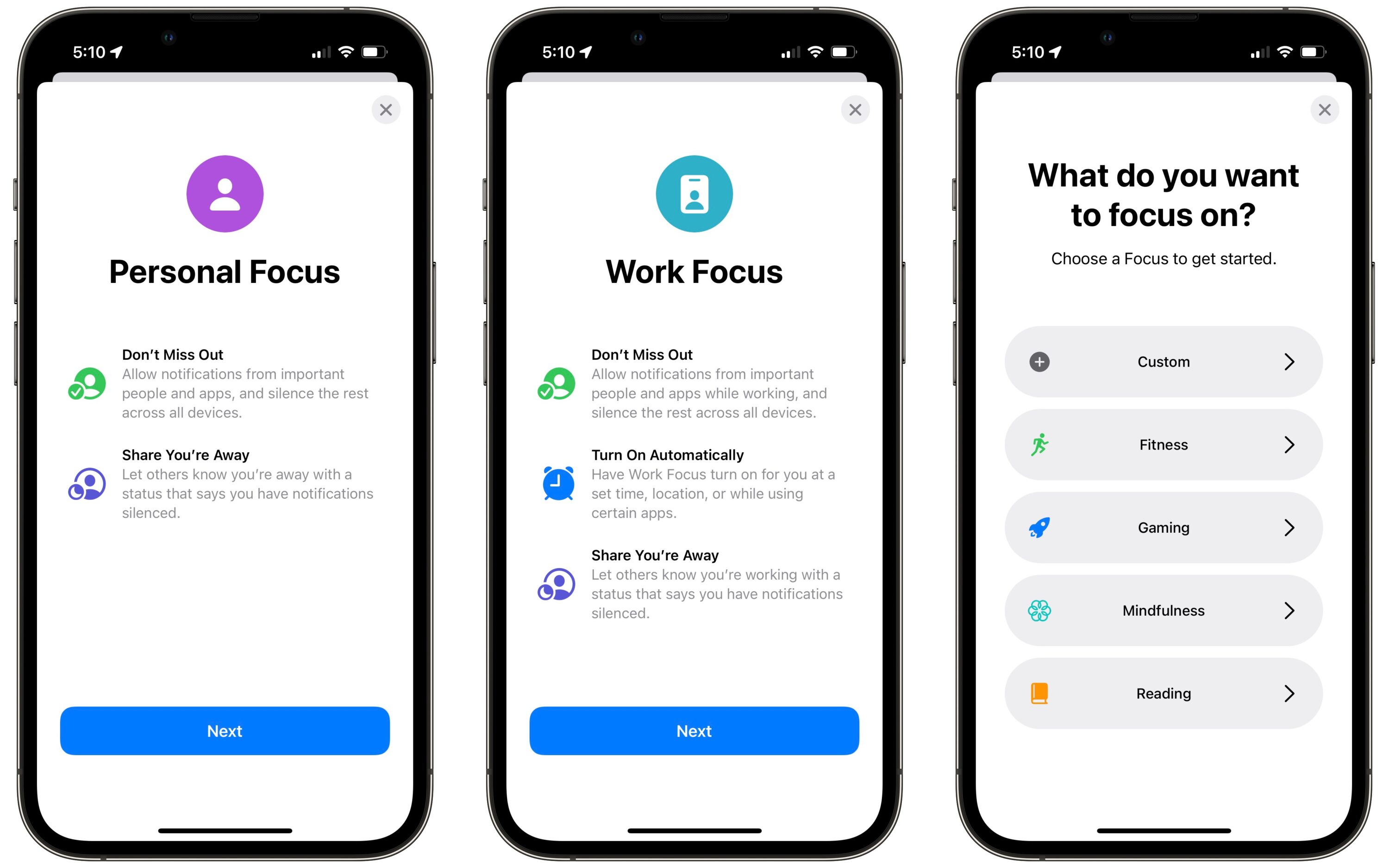 When configuring a suggested focus or creating a new one from scratch, Focus runs you through several setup screens. One has you choose people whose notifications you want to come through regardless, and what to do about incoming phone calls. The other screen lets you pick which apps can notify you when the focus is active, with an additional option to allow notifications marked as Time Sensitive regardless. (Time Sensitive notifications include timed Reminders alerts, for instance, and are usually best left enabled—see “A Quick Primer on Time Sensitive Notifications,” 13 December 2021.)

Once your Focus is ready, you can configure various options, including: 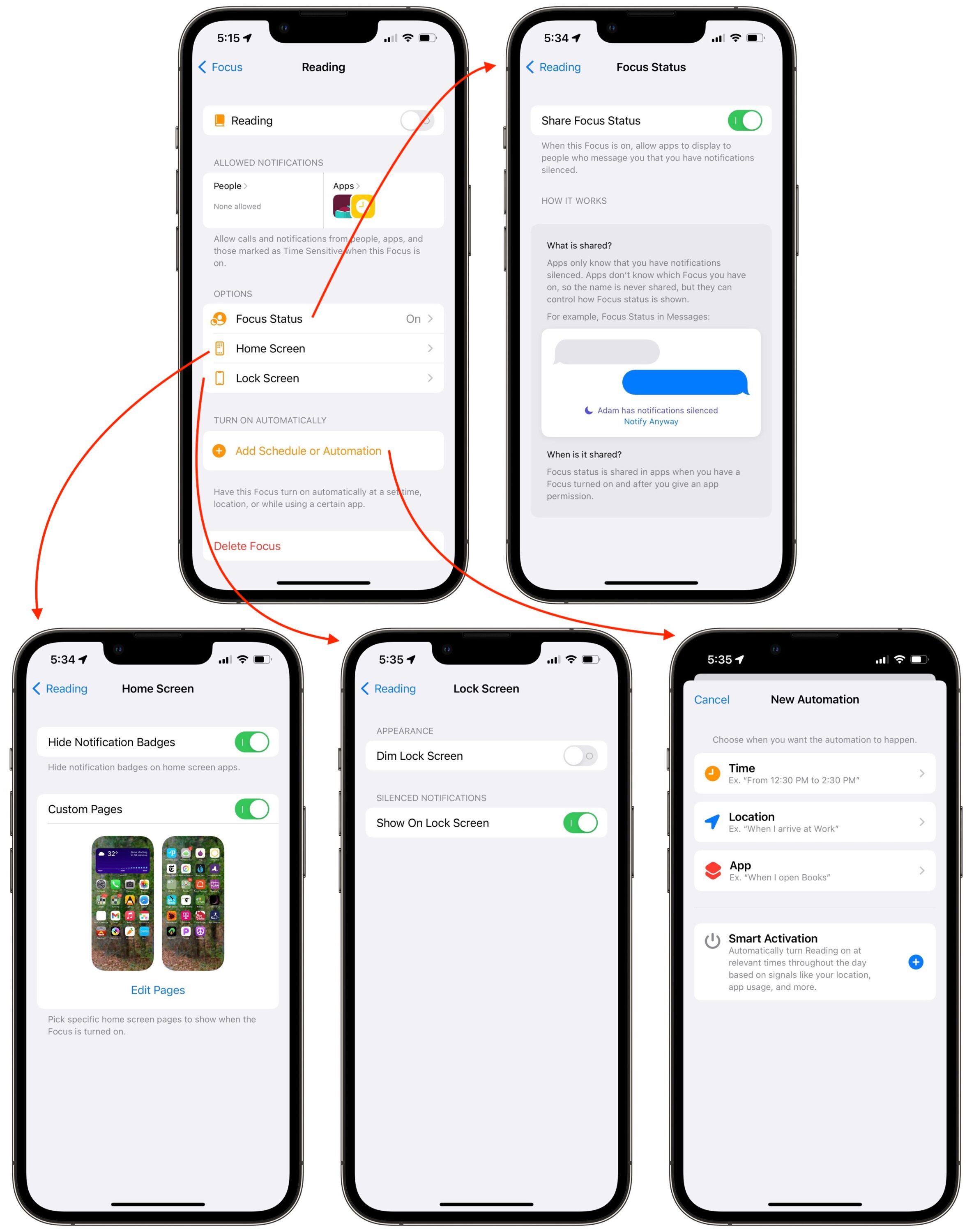 In terms of functionality, the Focus feature provides all the flexibility one could want. But as I suggest above, with such power comes the opportunity to mess things up royally. When I was first testing Focus, I created a Fitness focus that turned on automatically when I was working out. I don’t use the Workout app on the Apple Watch, but I do use Strava, and on a 6-mile hike during which I was hoping to pass the time on phone calls with some relatives, I missed several return calls—I’d called and left messages—because Strava’s workout triggered the Fitness focus. Curses!

I’ll be blunt. The more I’ve lived with Focus and helped friends and relatives understand the implications of using it, the more the feature annoys me. My irritations include:

So here are my recommendations if you aren’t already happy with your Focus setup:

The core problem with Focus is that it’s an allow-few approach—it blocks everything other than what you allow through. That’s not unreasonable because you can separately employ a block-few approach that allows everything except what you specify by making use of Notification Summaries and disabling individual app notification settings. But allow-few approaches often inadvertently catch more than is desired—they force you to imagine what might be caught in advance—and must thus be implemented with caution.

Or perhaps I’m merely grumpy about Focus because its banners interrupt me more than the notifications from which it is supposedly protecting me. If you’re a fan of Focus—or have expansions on my criticisms—let us know in the comments.