Get ready for the most significant set of Apple operating system updates since the release of macOS 11, iOS 14, iPadOS 14, watchOS 7, and tvOS 14 last year. In this bundle of updates—iOS 14.5, iPadOS 14.5, macOS 11.3, watchOS 7.4, tvOS 14.5, and HomePod Software 14.5—Apple has added support for its new AirTags, tweaked Siri, and beefed up Apple Music, Podcast, News, and Reminders. iOS 14.5 and watchOS 7.4 also allow fallback authentication to an Apple Watch when Face ID fails due to mask-wearing, and macOS 11.3 improves its support for running iOS and iPadOS apps on M1-based Macs.

Given the compelling nature of some of these features and the importance of the security fixes, we recommend installing sooner rather than later. However, it’s still worth waiting at least a few days to make sure there are no unwanted side effects. If nothing else, AirTags will start arriving on 30 April 2020, so if you’ve ordered some, you’ll want to update by then. (In fact, there is nothing more to say about AirTagsupport in these updates since it’s built into the Find My app.)

After a quick look at the Apple Watch fallback authentication for Face ID mask failures, we’ll cover the features shared among some or all of the operating systems, followed by changes that are specific to each. Note that iPadOS 14.5 is, as far as we can tell from the release notes, just a subset of iOS 14.5, so we won’t break it out separately.

If you have a Face ID-enabled iPhone and an Apple Watch, the “how fast can I install this update” feature in iOS 14.5 and watchOS 7.4 is the capability to unlock your iPhone if you attempt to use Face ID while wearing a mask. It works brilliantly, automatically unlocking your iPhone on Face ID failures if your Apple Watch is nearby, on your wrist, unlocked, and protected by a passcode.

To turn the feature on, go to Settings > Face ID & Passcode and scroll down to the Unlock With Apple Watch section. Enable the switch associated with your Apple Watch, and acknowledge that you understand the conditions under which the feature works. From then on, you won’t find yourself staring at your iPhone in a grocery store, wondering why it isn’t unlocking as it does at home. Instead, you’ll feel a haptic tap on your wrist, and your iPhone will unlock before you have a chance to realize you’re wearing a mask. 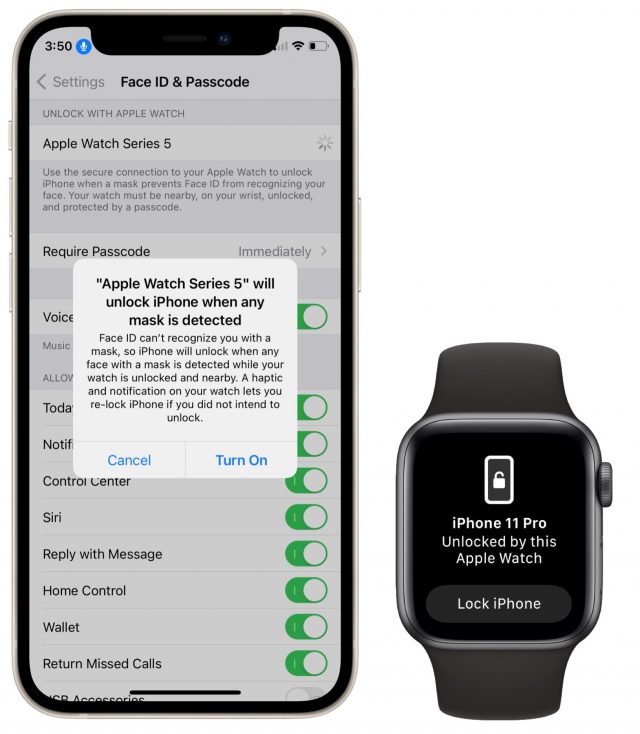 The most contentious feature of iOS 14.5 and iPadOS 14.5 is Apple’s new App Tracking Transparency technology, the latest blow in its effort to stem the egregious privacy abuses foisted on users (see “Apple Unveils Stringent Disclosure and Opt-in Privacy Requirements for Apps,” 7 January 2021). App Tracking Transparency “lets you control which apps are allowed to track your activity across other companies’ apps and websites for ads or sharing with data brokers.” Earlier this month, Apple published a white paper outlining how it works.

We’re curious to see if most people even notice App Tracking Transparency. That’s because it appears, at least on our iPhones and iPads, that Apple has disabled the Allow Apps to Request to Track option in Settings > Privacy > Tracking by default. Since apps cannot restrict functionality based on your answer, there is no rational reason that we can see to turn that feature on and allow apps to request peeping-tom privileges. If an app does present a prompt asking if it can track you, we recommend saying no, adding an obscenity, and deleting the app with prejudice.

In an effort to be more inclusive and support Apple’s long-standing contention that Siri has no gender, these updates add two new voices to Siri’s American English choices and eliminate the default voice option, so everyone gets to pick their preferred voice during initial device setup. However, it doesn’t prompt you to choose when you’re merely updating your operating system, so if you want to test-drive the new voices, visit Settings > Siri & Search > Siri Voice (iOS) or System Preferences > Siri (macOS). 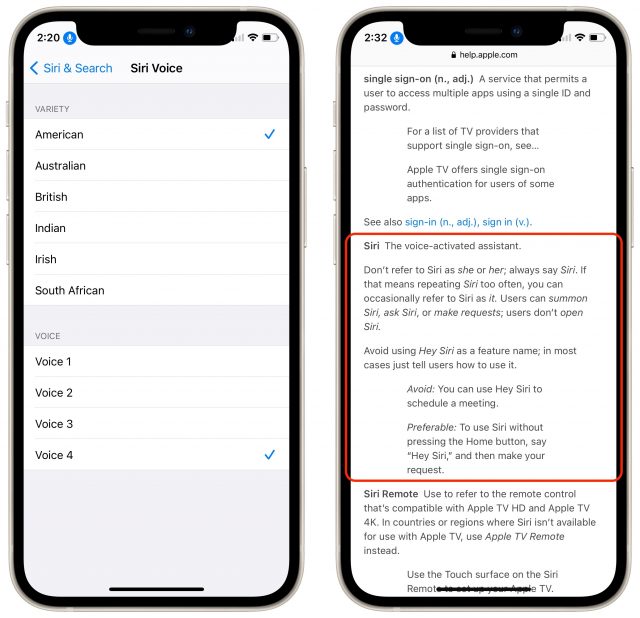 It’s good to see Apple bring more diversity to Siri’s voices and eliminate assumptions that could make some users uncomfortable. Voice 4 was previously identified as “female” (with Voice 1 as the traditional “male” counterpart), but Adam is giving the new Voice 3 a try, although he generally prefers voices with accents that disguise speech synthesis pronunciation flubs that would be more obvious in an American accent.

Siri can also now default to using alternative apps for music, podcasts, and audiobooks. If you have third-party apps installed that can handle those types of content, the first time you ask Siri to play audio after updating to iOS 14.5, you will be asked which one to use. If you later want to change, just specify the service name once (“Hey Siri, play Planet Money on Overcast”), and Siri will switch to that service going forward. 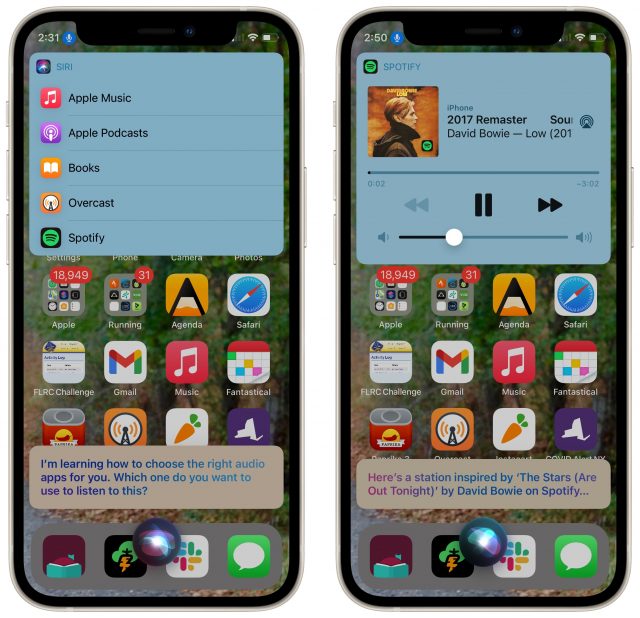 Other new Siri features (at least in iOS and iPadOS) include:

Although none of these changes are earth-shaking, they may be welcome:

In device-specific fixes, the iOS 14.5 update will recalibrate maximum battery capacity on iPhone 11 models to fix inaccurate battery health estimates. It also re-optimizes the iPhone 12 display to reduce a dim glow that appears at reduced brightness settings and black backgrounds.

Finally, iOS 14.5 and iPadOS 14.5 sport 44 security fixes that address a multitude of vulnerabilities, including one in WebKit Storage that Apple says may have been actively exploited in the wild.

As noted above, macOS 11.3 Big Sur includes many of the same changes as iOS 14.5 and iPadOS 14.5. Nonetheless, Apple did give macOS some attention on its own as well:

Finally, the security notes for macOS 11.3 list 53 security fixes, including the concerning WebKit Storage vulnerability that may have been exploited in the wild. Potentially even worse is another vulnerability in System Preferences that could enable a malicious app to bypass Gatekeeper checks. Although Apple doesn’t acknowledge this in the security notes, an article at Motherboard claims that this vulnerability, which could allow a malicious app double-clicked by the user to take over the Mac, has been circulating in malware since early 2021. Update soon.

The macOS 11.3 update is a 5.71 GB download, available from Software Update.

Apart from being able to unlock iPhones when Face ID is stymied by a mask, Apple says that watchOS 7.4 gives you the option of classifying the Bluetooth device type in Settings so you can correctly identify headphones for audio notifications. We’re not entirely sure what that means yet.

watchOS 7.4 also brings support for the ECG app and irregular heart rhythm notifications for users in Australia and Vietnam, suggesting that Apple finally got regulatory clearance there.

Unsurprisingly, Apple also released tvOS 14.5, which adds the new color calibration feature mentioned in “Apple Updates Apple TV 4K; Introduces New Siri Remote” (20 April 2021). Once you have updated your Apple TV and your iPhone, go to Settings > Video and Audio > Calibration to try it out.

If you’ve had trouble running out of space on your Apple TV, tvOS 14.5 can now automatically offload apps, just as iOS will do when it needs to reclaim space. The app data is saved, and the apps remain on your Home screen, and the app will download again automatically when you try to launch it. Look for the setting in Settings > Apps.

Although typing in tvOS is painful at best, tvOS 14.5 gains the Type to Siri feature that has been available in iOS for some time, which lets you type Siri requests instead of speaking them. Turn it on in Settings > Accessibility.

Apple published details of tvOS 14.5’s 32 security fixes, many shared with the other operating systems.

At press time, Apple hadn’t yet published any release notes for HomePod Software 14.5. However, in the Home app, it’s described as including “general performance and stability improvements.” The only change we could identify was the addition of the two new Siri voices.

The HomePod Software 14.5 update weighs in at 667.1 MB. To install it, open the Home app, and if an Update Available button appears, tap it. Otherwise, touch and hold the HomePod tile, tap the gear icon to enter settings, and then tap Update near the top of the screen. Left to its own devices, the HomePod should update itself as well. 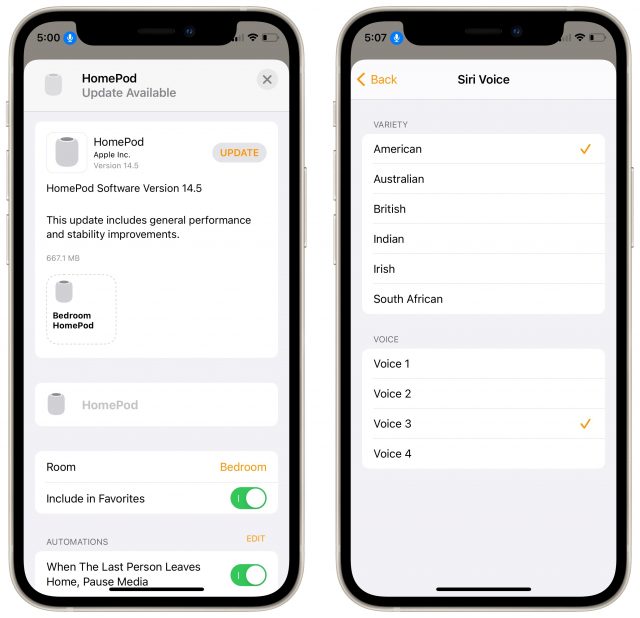 Phew! Have you noticed anything else in any of these updates? With any luck, we’ll see only a few minor bug and security fix releases before it’s time to move on to iOS 15, iPadOS 15, macOS 12, watchOS 8, and tvOS 15.