Apple Weathers the Storm to Shatter Records in Q1 2021 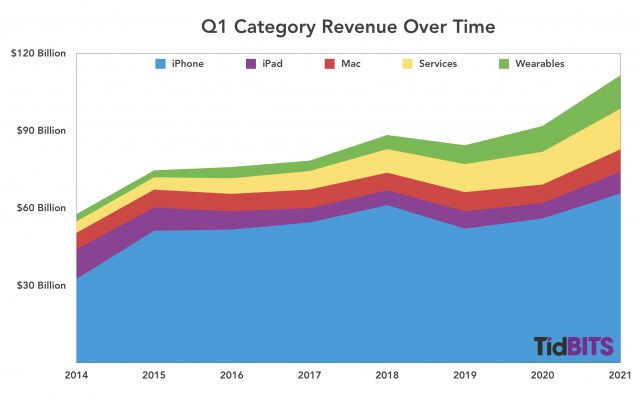 Apple CEO Tim Cook seemed almost apologetic about Apple’s success in a crumbling world, kicking off the quarterly investor call with an outline of various charitable efforts Apple is involved with, such as its recently announced racial equity initiatives (see “Apple Launches New Racial Equity and Justice Initiative Projects,” 13 January 2021), its long-standing partnership with Product Red, and a pledge to invest $350 billion in the United States economy.

But that financial success could not be ignored: the company saw double-digit growth in all of its product categories and in all the geographic sectors it serves. Even FaceTime had an up quarter: Cook said that Apple handled the highest number of FaceTime calls ever over the holiday season. He also said that the quarter saw 1.65 billion Apple devices activated.

Apple saw a 17.2% year-over-year increase in iPhone revenue, up $65.6 billion from $56 billion in the year-ago quarter. CFO Luca Maestri specifically called out the iPhone 12 Pro and 12 Pro Max as big sellers, and he said that iPhone 12 customer satisfaction ratings were at 98%. Maestri said nothing about the iPhone 12 mini and rumors that its sales have been disappointing—nor did analysts ask him about that. 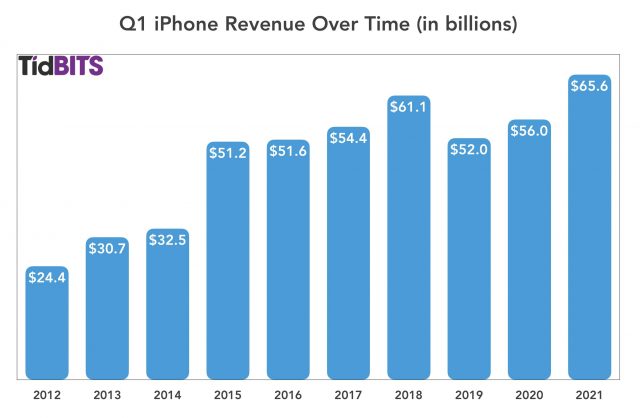 One interesting benchmark: by the end of the quarter, users had activated over one billion iPhones.

The Mac line saw a 21.2% year-over-year revenue increase, which Maestri credited to the new lineup of the MacBook Air, MacBook Pro, and Mac mini powered by Apple’s new M1 chip. The Mac brought in $8.7 billion in Q1 2021, up from $7.2 billion in Q1 2020. Mac sales rose in all geographic sectors, and he noted that Macs were achieving an average 94% customer satisfaction rating. Taking into account Apple’s relatively low market share in the personal computer market, the vibrant sales performance of the new M1-based Macs led Cook to predict a rosy future for the venerable product line. 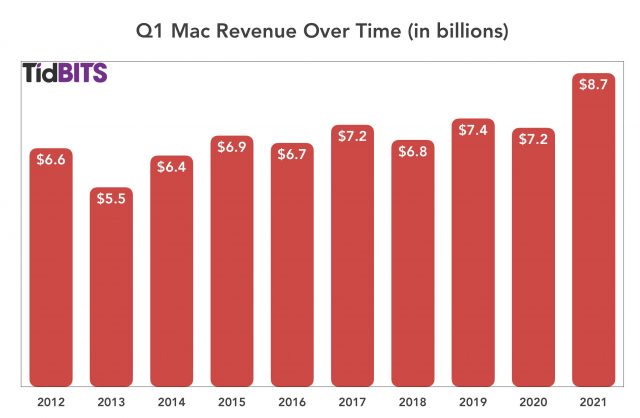 The iPad had an outstanding quarter, with an almost startling 41.1% year-over-year revenue jump, bringing in $8.4 billion in revenue for Apple, up from $6 billion in the year-ago quarter. Cook ranked the iPad product line as the best Apple has ever had, pointing out that some people were purchasing the devices to serve as replacement laptop computers, while others were buying them in addition to laptop or desktop devices. The need for remote computing devices during the pandemic certainly contributed to the product line’s quarterly success. However, Cook also mentioned the effect of increasing sales in the education market, with iPad school deployments in Japan and Germany being the largest ever. 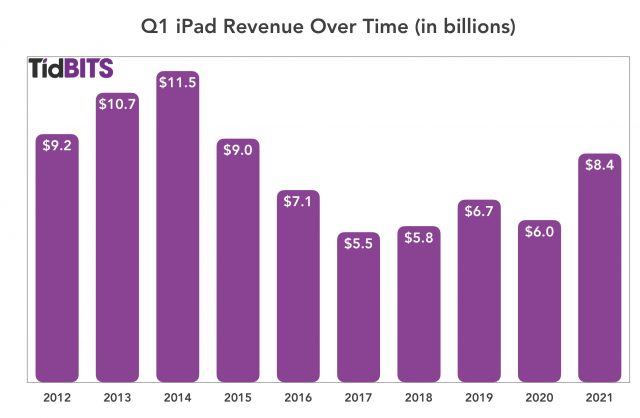 Apple’s miscellaneous bucket of wearables, home, and accessories also did very well, with a 29.6% year-over-year revenue increase. At $13 billion in revenue, the category was $3 billion higher than the year-ago quarter. AirPods of all types, including the new high-end AirPod Max headphones, boosted this category’s results, experiencing extremely strong demand during the holiday season (“Apple’s One Last Thing for 2020: AirPods Max,” 8 December 2020). Despite the new headphones’ $549 price tag, Cook said that supplies would be limited for the foreseeable future. Cook also praised the strong sales of the new softball-size HomePod mini, which lists for just $99. 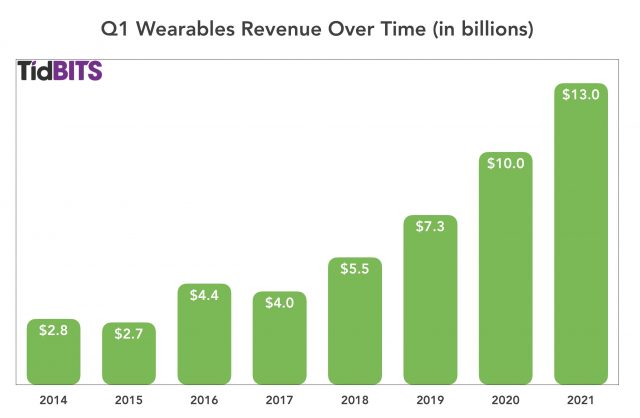 The Services sector, which has been surging in recent quarters, also performed admirably, posting a 24% year-over-year revenue increase. Apple gave much credit to the new Apple One service bundles, along with Apple Music, iCloud, and other services. App Store subscriptions also rose. However, Apple probably can’t credit Apple TV+ much, as most of its customers are still on a free trial, now extended for a second time, through July 2021. Services brought in $15.8 billion this quarter, compared with $12.8 billion in the year-ago quarter. 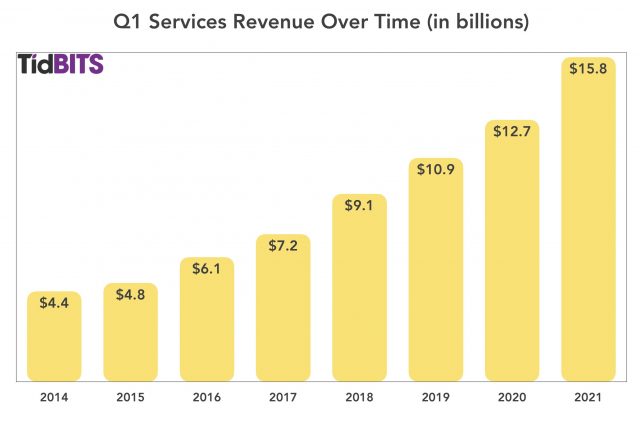 Apple’s sales increased in all geographic sectors. Business in China was especially strong, showing 57% revenue growth, which Cook credited in part to the introduction of the 5G-capable iPhone 12 line. Cook said that 5G networks are well-established in China so the demand was already there—though he was quick to point out that it wasn’t just iPhones and 5G affecting Apple’s China results: Mac and iPad sales there exceeded “company averages” as well.

Sales in Japan also grew during the quarter, with revenue increasing by 33.1%, thanks in part to record iPad demand there.

Cook noted opportunities for growth in both Latin America and India. Although sales in the latter region have doubled in the last year, he described Apple’s market share there as low enough to offer lots of headroom for growth. 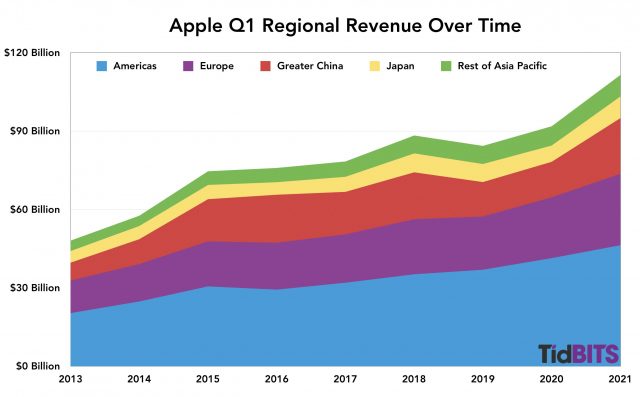 Apple Can’t Even Give Its Money Away

Can anything slow the Apple juggernaut? For a few months, it appeared that Apple had cooled down, but even in the midst of the COVID-19 pandemic, the company is back to smashing records and dazzling investors. Every participant on the quarterly call began by heartily congratulating Tim Cook. In fact, the praise was so effusive and repetitive that, if you were only half listening, you might have mistakenly assumed he’d just had a baby.

Interestingly, one of the few areas in which Apple seems to be failing is in its mission to give its cash hoard away. In its Q1 2021 press release, Apple said, “We also returned over $30 billion to shareholders during the quarter as we maintain our target of reaching a net cash neutral position over time.”

Yet, despite giving away $30 billion in the past quarter, Apple now has a cash stash of $195.57 billion, which is actually up 2% from a quarter ago! The company literally can’t give away money fast enough. Perhaps it could consider sending stimulus payments to every American.

Or at least increase the free iCloud storage tier from the embarrassingly small 5 GB.